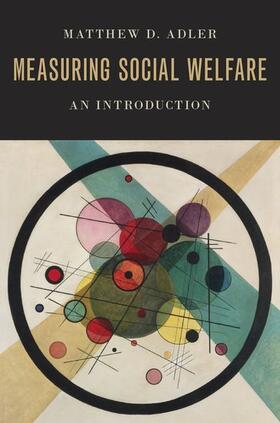 Disputes over government policies rage in a number of areas. From taxation to climate change, from public finance to risk regulation, and from health care to infrastructure planning, advocates debate how policies affect multiple dimensions of individual well-being, how these effects balance against each other, and how trade-offs between overall well-being and inequality should be resolved.

How to measure and balance well-being gains and losses, is a vexed issue. Matthew D. Adler advances the debate by introducing the social welfare function (SWF) framework and demonstrating how it can be used as a powerful tool for evaluating governmental policies. The framework originates in welfare economics and in philosophical scholarship regarding individual well-being, ethics, and distributive justice. It has three core components: a well-being measure, which translates each of the possible
policy outcomes into an array of interpersonally comparable well-being numbers, quantifying how well off each person in the population would be in that outcome; a rule for ranking outcomes thus described; and an uncertainty module, which orders policies understood as probability distributions over
outcomes. The SWF framework is a significant improvement compared to cost-benefit analysis (CBA), which quantifies policy impacts in dollars, is thereby biased towards the rich, and is insensitive to the distribution of these monetized impacts. The SWF framework, by contrast, uses an unbiased measure of well-being and allows the policymaker to consider both efficiency (total well-being) and equity (the distribution of well-being).

Because the SWF framework is a fully generic methodology for policy assessment, Adler also discusses how it can be implemented to inform government policies. He illustrates it through a detailed case study of risk regulation, contrasting the implication of results of SWF and CBA. This book provides an accessible, yet rigorous overview of the SWF approach that can inform policy-makers and students.

Adler is the author of New Foundations of Cost-Benefit Analysis (Harvard, 2006; co-authored with Eric Posner) and Well-Being and Fair Distribution: Beyond Cost-Benefit Analysis (Oxford, 2012). He edited the Oxford Handbook of Well-Being and Public Policy with Marc Fleurbaey (2016). He was an editor of the journal Legal Theory until 2017, and is now an editor of the journal Economics and Philosophy.