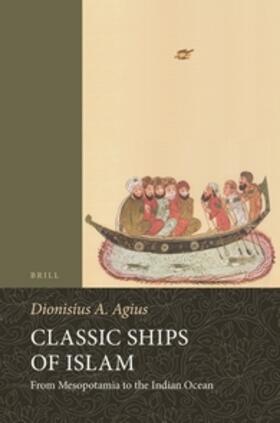 Agius Classic Ships of Islam: From Mesopotamia to the Indian Ocean

Agius Classic Ships of Islam: From Mesopotamia to the Indian Ocean

This book charts the development of Islamic ships and boats in the Western Indian Ocean from the seventh to the early sixteenth century with reference to earlier periods. It utilizes mainly Classical and Medieval Arabic literary sources with iconographical evidence and archaeological finds.
The interdependence of various trading activities in the region resulted in a cross fertilization, not only of goods but also of ideas and culture which gave an underlying cohesion to the Arabian, Persian and Indian maritime peoples. This study has led to a re-evaluation of that maritime culture, showing that it was predominantly Persian and Indian, with Chinese influence, throughout the Islamic period until the coming of the Portuguese, as reflected in nautical terminology and technology.

Agius, Dionysius A.
Dr Dionisius A. Agius is a Fellow of the British Academy. He currently holds the Al Qasimi Professorship in Arabic and Islamic Material Culture at the University of Exeter and is affiliated with King Abdulaziz University, Jeddah. Originally from the Island of Malta, he read Arabic and Islamic Studies at the Université St-Joseph, Beirut, the Pontificio Istituto di Studi Arabi, Rome, and University of Toronto. An ethnographer, and linguist with particular expertise in Arabic semantics he has, for the past twenty-five years, focused on the traditional watercraft of the Western Indian Ocean, past and present, studying their typology and provenance as well as the people of the sea, their folklore and belief. Author of In the Wake of the Dhow: The Arabian Gulf and Oman (2002, 2010) and Seafaring in the Arabian Gulf and Oman: The People of the Dhow (2005, 2009), the latter being awarded a major book prize by The Abdullah Al-Mubarak Al-Sabah Foundation and the British-Kuwait Friendship Society. His latest work, Classic Ships of Islam: From Mesopotamia to the Indian Ocean (2008) was given Honourable Mention by The Keith Matthews Prize and was Highly Commended by The Keith Muckelroy Memorial Award.