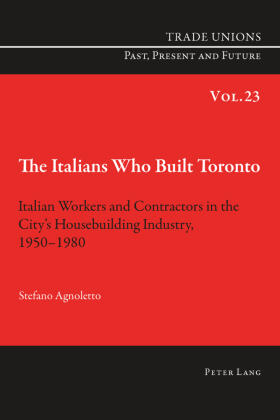 Agnoletto The Italians Who Built Toronto

Italian Workers and Contractors in the City's Housebuilding Industry, 1950-1980

Agnoletto The Italians Who Built Toronto

After World War II, hundreds of thousands of Italians emigrated to Toronto. This book describes their labour, business, social and cultural history as they settled in their new home. It addresses fundamental issues that impacted both them and the city, including ethnic economic niching, unionization, urban proletarianization and migrants’ entrepreneurship.
In addressing these issues the book focuses on the role played by a specific economic sector in enabling immigrants to find their place in their new host society. More specifically, this study looks at the residential sector of the construction industry that, between the 1950s and the 1970s, represented a typical economic ethnic niche for newly arrived Italians. In fact, tens of thousands of Italian men found work in this sector as labourers, bricklayers, carpenters, plasterers and cement finishers, while hundreds of others became contractors, subcontractors or small employers in the same industry. This book is about these real people. It gives voice to a community formed both by entrepreneurial subcontractors who created companies out of nothing and a large group of exploited workers who fought successfully for their rights. In this book you will find stories of inventiveness and hope as well as of oppression and despair. The purpose is to offer an original approach to issues arising from the economic and social history of twentieth-century mass migrations.

Contents: Post World War II Toronto: a favourable yet contradictory setting for Italian newcomers - The Italian Community - Italians in Toronto: a successful history? - The Italian niche: the 'jungle' of the construction industry - Sciopero! The processes of unionization and the 1960-1961 strikes - The 'Italian way'. Unionization and class conflicts in the 1960s and the 1970s - Structure vs identity? An overview of the literature and theoretical frameworks.

Agnoletto, Stefano
Stefano Agnoletto (PhDs in Economic History, IUN University of Napoli and Modern History, Kingston University of London) is currently a teaching fellow at Bocconi University in Milano. Over the last two decades he has collaborated with various Italian and Canadian universities. He was a visiting professor at Novorsibirsk State University in Russia and at the Instituto Tecnològico de Estudios Superiores of Monterrey in Mexico, and he was a visiting scholar at York University of Toronto in Canada. He has carried out many research projects as a junior and senior researcher. Testifying to this research activity is a large body of publications edited in Italy, the United Kingdom, the United States, Spain, Russia and Poland.