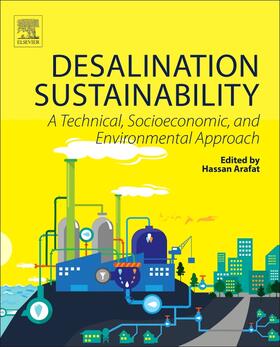 Desalination Sustainability: A Technical, Socioeconomic, and Environmental Approach presents a technical, socioeconomical, and environmental approach that guides researchers and technology developers on how to quantify the energy efficiency of a proposed desalination process using thermodynamics-based tools.

The book offers the technical reader an understanding of the issues related to desalination sustainability. For example, technology users, such as public utility managers will gain the ability and tools to assess whether or not desalination is a good choice for a city or country.

Readers will learn new insights on a clear and practical methodology on how to probe the economic feasibility of desalination using simple and effective tools, such as levelized cost of water (LCOW) calculation.

Decision-makers will find this book to be a valuable resource for the preliminary assessment of whether renewable-powered desalination is a good choice for their particular setting.

Arafat, Hassan
Prof. Arafat received his Ph.D. in Chemical Engineering from the University of Cincinnati (Ohio, USA) in 2000. From 2000-2003, he worked as a researcher and project manager at Argonne National Laboratory (ANL) (Illinois, USA). His research at ANL was focused on process development for nuclear waste treatment at DOE sites. Between 2003 and 2010, Dr. Arafat served as a faculty member at the Chemical Engineering Department at An-Najah University (Palestine). In 2010, he joined Massachusetts Institute of Technology (MIT) as a visiting scholar for six months, after which he moved to Abu Dhabi (UAE) where he now works at Masdar Institute of Science and Technology in the Department of Chemical and Environmental Engineering. He is a recipient of several prestigious international awards and international research fellowships, including the USA Department of Energy (DOE) Secretarial Honor Award and the Mondialogo Engineering Award, awarded jointly by Daimler AG and UNESCO. He is also the recipient of 16 grants totaling USD $10M. He is an author of 70+ book chapters and peer-reviewed journal papers and 80+ conference papers. The focus of Dr. Arafat's research interests is on sustainable and autonomous desalination processes, the development of novel membranes for desalination and the development of sustainable solid waste management strategies. Dr. Arafat serves on the editorial board of many international peer- reviewed journals