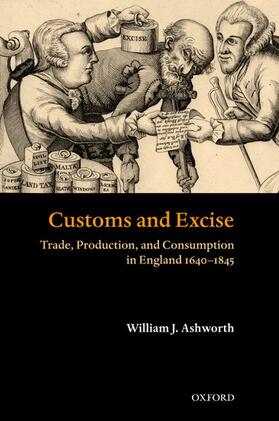 Ashworth Customs and Excise: Trade, Production, and Consumption in England, 1640-1845

Ashworth Customs and Excise: Trade, Production, and Consumption in England, 1640-1845

Asis book traces the growth of customs and excise, and their integral role in shaping the framework of industrial England; including state power, technical advance, and the evolution of a consumer society. Central to this structure was the development of two economies - one legal and one illicit. If there was a unique English pathway of industrialization, it was less a distinct entrepreneurial and techno-centric culture, than one predominantly defined within an
institutional framework spearheaded by the excise and a wall of tariffs. This process reached its peak by the end of the 1770s. The structure then quickly started to crumble under the weight of the fiscal-military state, and Pitt's calculated policy of concentrating industrial policy around cotton,
potteries, and iron - at the expense of other taxed industries. The breakthrough of the new political economy was the erosion of the illicit economy; the smugglers' free trade now became the state's most powerful weapon in the war against non-legal trade. If at the beginning of the period covered by this book state administration was predominantly deregulated and industry regulated, by the close the reverse was the case.