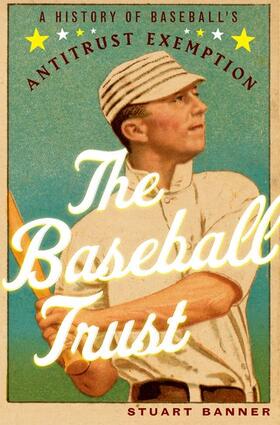 A History of Baseball's Antitrust Exemption

The Baseball Trust is about the origins and persistence of baseball's exemption from antitrust law, which is one of the most curious features of our legal system and also one of the most well known to sports fans. Every other sport, like virtually every other kind of business, is governed by the antitrust laws, but baseball has been exempt for nearly a century. No one thinks this state of affairs makes any sense. The conventional explanation of this oddity
emphasizes baseball's unique cultural status as the national pastime, and assumes that judges and legislators have expressed their love for the game by insulating it from antitrust attack. A serious baseball fan, Stuart Banner provides a thoroughly entertaining history of the game through the prism of the
antitrust exemption. But he also narrates a very different kind of baseball history, one in which a sophisticated business organization successfully worked the levers of the legal system to achieve a result enjoyed by no other industry in America. For all the well-documented foibles of the owners of major league baseball teams, baseball has consistently received and followed smart antitrust advice from sharp lawyers, going all the way back to the 1910s. At the same time, it is a story that
serves as an arresting reminder of the path-dependent nature of the legal system. At each step, judges and legislators made decisions that were perfectly sensible when considered one at a time, but this series of decisions yielded an outcome that makes no sense at all.

Banner, Stuart
Stuart Banner is a law professor at UCLA. He is the author of several books, including most recently American Property: A History of How, Why, and What We Own (2011). He is a Mets fan and a former little league coach.