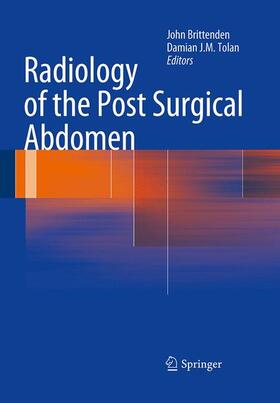 A comprehensive description of the most common abdominal operations involving the gastrointestinal tract, pancreas, liver and genitourinary systems, illustrated with artists' drawings and images of normal post operative anatomy. The complications associated with each procedure will be in table format consisting of text alongside imaging examples. There will also be teaching points included. The book will be divided into nine chapters.

Dr John Brittenden is a Gastrointestinal Radiologist at Mid Yorks NHS Trust with a particular interest in abdominal MRI, CT Colonography and non vascular intervention. He has been a consultant for 5 years and prior to this completed his radiology training in Leeds with further fellowships in radiofrequency ablation and GI/interventional radiology at University College London and The Royal Adelaide Hospital, South Australia. He is an Honorary Senior Lecturer at the University of Leeds. He is a member of the British Society of Gastrointestinal and Abdominal Radiologists (BSGAR) and is an active member of ESGAR.

Dr Damian Tolan is a Gastrointestinal Radiologist at St James's University Hospital, Leeds with a particular interest in luminal GI imaging and one of 8 radiologists with a GI interest. He lectures at UK and European meetings, organizes training courses in CT Colonography and is involved in research on a range of areas including inflammatory bowel disease and anorectal disorders. He is the research officer for the British Society of Gastrointestinal and Abdominal Radiologists and is an active member of ESGAR.

Authors comprise the editors and an invited panel of radiologists and surgeons from the North of England, who have a track record of publications in European and North American journals.