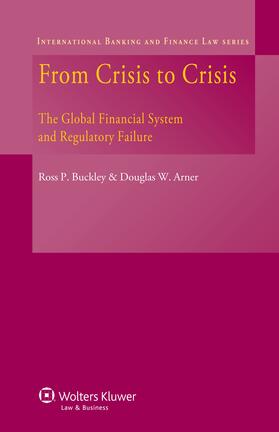 Buckley / Arner From Crisis to Crisis

Buckley / Arner From Crisis to Crisis

The global financial system – founded on principles of capital account liberalization, the process by which barriers to capital flows between nations are eliminated and financial globalization facilitated – has proven highly crisis-prone and deficient for debtors and creditors alike. Since 2008 we have been learning once again that mistakes in global finance can bring rich countries to the brink of bankruptcy and appalling suffering to the poorest citizens of poor countries. The predictable response measures of institutional economists fail to stop the continuing sacrifice of the lives of thousands and the futures of millions. This book presents a powerful indictment of this regulatory failure and calls for greatly increased attention to international financial law and a new recognition of the principles that ought to underlie it. Using a historical approach that compares the various financial crises of the twentieth century, the authors clearly show how in each case the same misconceived economic policy responses paved the way for the next ‘crash’. Among the numerous topics that arise in the course of this revealing analysis are the following:

The author offers detailed commentary on: the role of multilateral development banks, the IMF, and the WTO in crisis response; measures stemming from the Basel Accords, the Brady Plan, and other response initiatives; and proposals by the European Commission, the G20, and other groups, including financial transaction tax schemes and a global sovereign bankruptcy regime. Apart from its great usefulness as a detailed introduction to the international financial system and its regulation, the book is enormously valuable for its clear identification of the specific ‘danger zones’ in economic policy that prevent regulators from intercepting the vicious cycle of financial crisis. Banking and investment policymakers at every level (not to mention bankers and investors themselves) cannot afford to neglect this book.