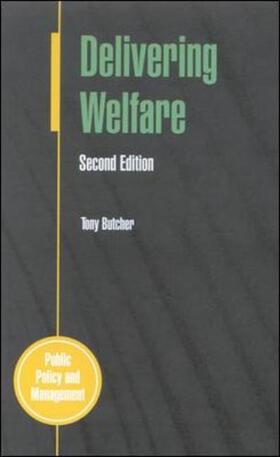 Acclaim for the first edition of Delivering Welfare:

".well exceeds its brief to provide an authoritative guide and essential work of reference." (Political Studies)

"The important thing about this book is that it brings together, in a careful and scholarly way, information on the changing delivery system for welfare in Britain." (Public Administration)

".a very useful introductory text which should win the gratitude of many students." (Teaching Public Administration)

".a clear and comprehensive description of the new organizational structure of British social welfare, and an even-handed appraisal of its achievements and shortcomings." (Community Care)

".a useful and timely summary of changing arrangements for the delivery of health, housing, education, social security and the personal social services." (Health Service Journal)

Since the early 1980s, there has been a series of radical changes in the arrangements for the delivery of the major social services. Under the Thatcher and Major Governments, the traditional role of local authorities as front line delivery agencies of the welfare state was challenged. Privatization, the search for efficiency, and the customer orientation became important features of the system of welfare delivery. The Blair Government has continued many of these initiatives, as well as putting its own stamp on the arrangements for the delivery of welfare.

Delivering Welfare provides an up-to-date and critical survey of the role of central government, local authorities, the NHS and other agencies responsible for delivering the social services, and the directions that welfare delivery has taken since the early 1980s. This new edition has been completely revised and updated to take full account of the impact of the Blair Government. At a time when the issues of welfare delivery and the quality of public services are so high on the political agenda, it provides a timely study of an important subject.

Preface
Abbreviations
Introduction
Part one: The public face of welfare
Central government and welfare
The government of welfare outside Whitehall
The coordination and planning of welfare
Accountability and the public
Part two: New directions in the delivery of welfare
The rolling back of the local welfare state
The privatization of welfare delivery
The search for efficiency and value for money
The customer orientation
Conclusion: the new governance of welfare
References
Index

Butcher, Tony
Tony Butcher is Senior Lecturer in Government in the Department of Social Policy and Politics at Goldsmiths, University of London.