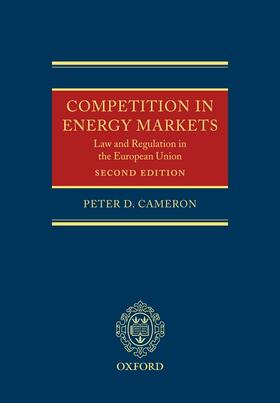 Cameron Competition in Energy Markets: Law and Regulation in the European Union

Cameron Competition in Energy Markets: Law and Regulation in the European Union

The new edition of this book gives a comprehensive update and analysis of European law as it affects competition in EU energy markets, especially oil, gas and electricity. This includes all relevant directives, regulations, Treaty provisions (including the energy chapter in the draft EU Constitution), case law and decisions of the ECJ, the CFI and the European Commission competition authorities. Appropriate consideration is also given to the new developments in EU
legal relations with Norway, Switzerland and other neighbouring countries. In this edition a special chapter examines the growing impact of environmental rules on the energy sector, especially with respect to renewable energy, nuclear power and the EU emissions trading scheme.

A new section on the competition law framework explains and describes in detail the growing impact of competition law instruments such as merger control, state aid and antitrust in this sector. The new edition also explains the greatly enhanced role of the national energy regulatory authorities and the European Competition Network in enforcing law at the European level, as well as the various challenges that may be made to their decisions.

The approach adopted in this edition is primarily analytical and practical, treating each problem that has arisen in application of the law and assessing the efficacy of the solution adopted. It examines the tensions that arise in the law as a result of conflicting policy objectives on environmental, internal market and security of supply concerns. The new edition draws on the insights of a high-level advisory panel of senior pracitioners, regulators and academics in the sector. The panel is
made up of Professor Sir David Edward, formerly at the ECJ; Maria Rehbinder, the Head of Unit for Energy and Water at DG Competition, European Commission; David Newbery, economics professor at Cambridge University; and Michael Brothwood, solicitor and occasional advisor to the House of Lords Select
Committee on Europe.

Cameron, Peter
Peter D Cameron is professor of international energy law and policy at the University of Dundee, and professor at the Robert Schuman Centre for Advanced Studies, European University Institute, Florence. He is a graduate of the University of Edinburgh and has written widely on energy law issues for the last two decades. He has been one of the founding members of the Florence School of Regulation, EUI. He has advised a variety of International financial institutes,
energy companies, and governmental authorities and regulatory bodies on the EU scene and internationally. He is also a Member of the International Bar Association Section on Energy, Environment, Natural Resources and Infrastructure Law; and a Member of the Association of International Petroleum
Negotiators.