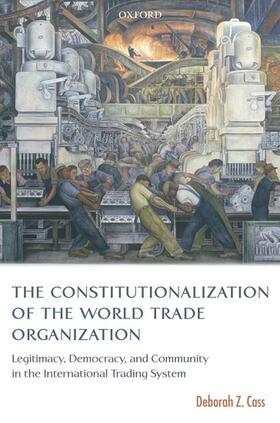 Cass The Constitutionalization of the World Trade Organization: Legitimacy, Democracy, and Community in the International Trading System

Cass The Constitutionalization of the World Trade Organization: Legitimacy, Democracy, and Community in the International Trading System

This is a book about the constitutionalization of the World Trade Organization, and the contemporary development of institutional forms and democratic ideas associated with constitutionalism within the world trading system.

The aim of the study, then, is to disentangle debates about the various meanings of the term 'constitution' when it used to apply to the World Trade Organization, and to reflect upon the significance of those meanings for more general international law conceptions of constitutions.

Cass argues that the WTO is not and should not be described as a constitution, either by the standards of any received account of that term, or by the lights of any of the current WTO models. Under these definitions serious issues of legitimacy, democracy and community are at stake. The WTO would lack a proper political structure to balance the work of its judicial bodies; it may curtail the ability of states to decide matters of national economic interest; it lacks authorization by a
coherent political community; and, it risks an emphasis upon economic goals and pure free trade over other, equally important, social values.

Instead, Cass argues that what is needed is a constitutionalized WTO which considers the economic development needs of states and takes account of the skewed playing field of international trade and its effect on the economic prospects of developing countries. In short, trading democracy, legitimacy and community and not trading constitutionalization, are the biggest challenges facing the WTO.

Cass, Deborah Z.
Dr. Deborah Z. Cass (S.J.D. Harv. and LL.B Melb) is a Reader in Law at the London School of Economics and Political Science where she teaches International Economic Law.