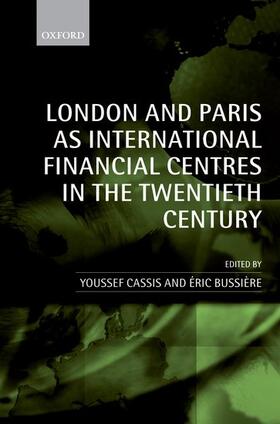 London and Paris, the world's two leading financial centres in the nineteenth century, experienced differing fortunes during the twentieth century. While London remained an international financial centre, Paris' influence declined. Yet over the last twenty years deregulation, internationalization, and the advent of the single currency have reactivated their competition in ways reminiscent of their old rivalry before the First World War.

This book provides a long-term perspective on the development of each centre, with special attention devoted to the pre-1914 years and to the last decades of the twentieth century, in order to contrast these two eras of globalization. The chapters include both archive-based and synthetic surveys and are written by the leading specialists of the field. This comparison between Europe's two leading capital cities will also provide new insights into two important subjects: the political economy of
Britain and France in the twentieth century, and the history of international financial centres.

As much as a comparison between London and Paris as international financial centres, this book is an Anglo-French comparison; in other words, it considers, through the prism of finance, several aspects of the two countries' economic, business, social, and political histories. It includes contributions from leading banking, financial, and economic historians, and will be of interest to academics, researchers, and students of Financial and Economic History, and the role of London and Paris in
particular.

Cassis, Youssef
Youssef Cassis is Professor of Contemporary Economic History, University of Grenoble II, and Visiting Fellow at the London School of Economics and Political Science. He is author of Big Business: The European Experience in the 20th Century (OUP, 1997), and co-editor of European Banks and the American Challenge: Competition and Cooperation in International Banking Under Bretton Woods (OUP, 2002), with Stefano Battilossi.