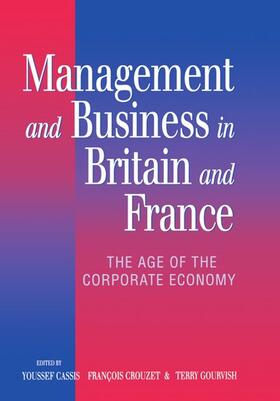 Cassis / Crouzet / Gourvish Management and Business in Britain and France: The Age of the Corporate Economy (1850-1990)

Cassis / Crouzet / Gourvish Management and Business in Britain and France: The Age of the Corporate Economy (1850-1990)

For generations, the uneasy relationship between Britain and France has captured the popular and scholarly imagination. Comparative studies between the two countries abound, from political systems to eating habits: hitherto they have not extended to business history.

There is now growing interest in comparative business systems, practices, and performance. In these areas comparison with America, Germany, or Japan have taken precedence. This volume, with contributions from leading British and French experts, explores comparative developments and trends in the two countries which for so long were the guiding lights of Europe and the world. In particular it looks at three main dimensions - the family firm; education and training; and mergers and company
structure.

With a mixture of case-studies, sectoral analysis, and wider-ranging comparison, the book will be a useful addition to an understanding of the evolution of business organization, competitivness, and performance.