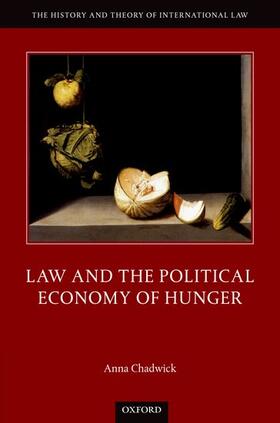 Chadwick Law and the Political Economy of Hunger

Chadwick Law and the Political Economy of Hunger

This book is an inquiry into the role of law in the contemporary political economy of hunger. In the work of many international institutions, governments, and NGOs, law is represented as a solution to the persistence of hunger. This presentation is evident in the efforts to realize a human right to adequate food, as well as in the positioning of law, in the form of regulation, as a tool to protect society from 'unruly' markets. In this monograph, Anna Chadwick draws
on theoretical work from a range of disciplines to challenge accounts that portray law's role in the context of hunger as exclusively remedial.

The book takes as its starting point claims that financial traders 'caused' the 2007-8 global food crisis by speculating in financial instruments linked to the prices of staple grains. The introduction of new regulations to curb the 'excesses' of the financial sector in order to protect the food insecure reinforces the dominant perception that law can solve the problem. Chadwick investigates a number of different legal regimes spanning public international law, international economic law,
transnational governance, private law, and human rights law to gather evidence for a counterclaim: law is part of the problem. The character of the contemporary global food system-a food system that is being progressively 'financialized'-owes everything to law. If world hunger is to be eradicated,
Chadwick argues, then greater attention needs to be paid to how different legal regimes operate to consistently privilege the interests of the wealthy few over the needs of poor and the hungry.

Chadwick, Anna
Anna Chadwick is a Lord Kelvin Adam Smith Fellow at the University of Glasgow. She started her current job after completing a two-year Max Weber Fellowship at the European University Institute, in Florence. She was awarded her doctorate by the London School of Economics and Political Science (LSE) in November 2015, and holds a Masters Degree in Public International Law and International and UK Human Rights Law (LLM) from King's College London, and an LLB from theUniversity of Leeds. Anna spent one year working for the legal charity, Reprieve, where she undertook investigation and research on death penalty cases. She is also part of a joint research initiative on food and finance. In 2017, she co-designed and taught a new Masters course 'Food, Law, and Finance'at International University College of Turin. Anna has also taught courses on International Human Rights Law, and World Hunger and the Global Legal Order.