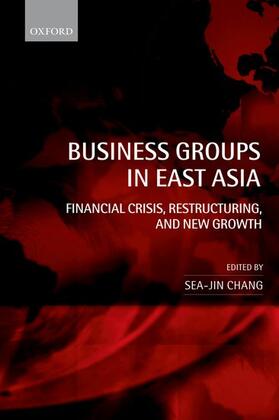 The 1997 Asian Crisis principally affected Thailand, Indonesia, Malaysia, and Korea, as well as other East Asian countries heavily dependent on intra-regional trade. Banks and other financial institutions quickly become insolvent, and heavily indebted industrial firms went bankrupt. Many of these firms were affiliated with the business groups of this region, yet most groups did not immediately collapse, indeed they proved remarkably robust, some surviving and even
prospering.

This book examines these East Asian business groups and their subsequent restructuring following the Asian Crisis. East Asian nations embarked on very different trajectories to this common external shock. The Asian Crisis affected the inter-relationships among the socio-cultural environment, the state, and the market of each country quite differently and had distinct effects on the operations of these countries' business groups. This slow yet divergent pattern of development provides evidence
against theories of rapid global convergence.

Yet East Asian business groups face an uncertain future. Foreign investors' influence has increased substantially since the crisis, as East Asian governments had to accommodate their demands to keep attracting foreign capital. Governments supervise banks more closely and have loosened restrictions on mergers and hostile takeovers, further strengthening the discipline of the market. Various entry barriers that had inhibited foreign multinationals from competing in national markets were lifted,
exposing business groups to intensified foreign competition. Under these new conditions, business groups in East Asia should reconfigure their business structures and adjust their corporate governance systems to regain momentum for further growth.

Business groups will continue to be important vehicles for the sustained future growth of this region, and this book presents a substantial amount of new data on this, which will be of interest to academics, researchers, and advanced students of East Asian business, and business practitioners working within the region.

Chang, Sea-Jin
Sea-Jin Chang is a Professor of Business Administration at Korea University. Prior to his return to Korea, he used to be a faculty member at the Stern School of Business of the New York University. He had visiting appointments at Stanford University, INSEAD and London Business School. His research has been published in journals such as Strategic Management Journal, Academy of Management Journal, Journal of Business Venturing, Review of
Economics and Statistics, Journal of Industrial Economics and Journal of Management Studies. He sits on the editorial boards of several leading journals. His recent book, The Rise and Fall of Chaebols: Financial Crisis and Transformation of Korean Business Groups (Cambridge University Press, 2003) explores the strategies Korean
business groups have pursued, examines various aspects of their structures, and assesses their performance.