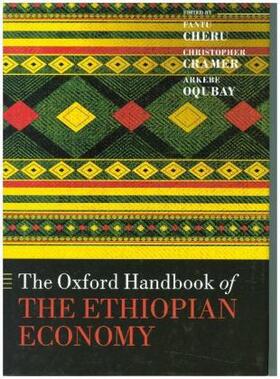 Cheru / Cramer / Oqubay The Oxford Handbook of the Ethiopian Economy

Cheru / Cramer / Oqubay The Oxford Handbook of the Ethiopian Economy

From a war-torn and famine-plagued country at the beginning of the 1990s, Ethiopia is today emerging as one of the fastest-growing economies in Africa. Growth in Ethiopia has surpassed that of every other sub-Saharan country over the past decade and is forecast by the International Monetary Fund to exceed 8 percent over the next two years. The government has set its eyes on transforming the country into a middle-income country by 2025, and into a leading
manufacturing hub in Africa.

The Oxford Handbook of the Ethiopian Economy studies this country's unique model of development, where the state plays a central role, and where a successful industrialization drive has challenged the long-held erroneous assumption that industrial policy will never work in poor African countries. While much of the volume is focused on post-1991 economic development policy and strategy, the analysis is set against the background of the long history of Ethiopia, and more specifically on
the Imperial period that ended in 1974, the socialist development experiment of the Derg regime between 1974 and 1991, and the policies and strategies of the current EPRDF government that assumed power in 1991.

Including a range of contributions from both academic and professional standpoints, this volume is a key reference work on the economy of Ethiopia.

Cheru, Fantu
Fantu Cheru is Emeritus Professor of International Relations, American University, Washington DC, USA, and a senior researcher at the African Studies Centre, Leiden University, The Netherlands. Between 1998 and 2001, Prof Cheru was the UN Special Rapporteur on Foreign Debt for the Human Rights Commission in Geneva. He was Associate Senior Fellow at the Stockholm International Peace Research Institute, Sweden, and the North-South Institute, Ottawa, Canada. From 2007
to 2012, Cheru was Research Director at the Nordic Africa Institute in Uppsala, Sweden. Dr Cheru was a member of UN Secretary-General Kofi Annan's Panel on Mobilizing International Support for the New Partnership for African Development (2005-07) as well as Convener of the Global Economic Agenda Track
of the Helsinki Process on Globalization and Democracy, Finland. Dr Cheru has served both as adviser and consultant to many governments and donor institutions and is on the editorial board of several scholarly journals.


Christopher Cramer is Professor of the Political Economy of Development at SOAS, University of London. A Fellow of the Academy of Social Sciences, he is also Vice-Chair of the Royal African Society and a former Chair of the Centre of African Studies at SOAS, University of London. He chairs the International Scientific Committee of the African Programme on Rethinking Development Economics (APORDE), based at the DTI in South Africa; was the principal investigator on the Fairtrade, Employment and
Poverty Reduction in Ethiopia and Uganda research project; has worked in South Africa and Ethiopia on the 'industrialisation of freshness'; and, amongst other publications, wrote the prize-winning Civil War is Not a Stupid Thing: Accounting for Violence in Developing Countries. He has undertaken
commissions for the World Bank, UNCTAD, ILO, EU, SIDA, DfID, and other agencies, and has worked with policy officials in Ethiopia, South Africa, and Mozambique.

Arkebe Oqubay is a Senior Minister and Special Adviser to the Ethiopian Prime Minister and has been at the centre of policymaking for over 25 years. He is a former Mayor of Addis Ababa and Minister of Works and Urban Development. He currently serves as board chair of several leading public organisations and international advisory boards. He is a research associate at the Centre of African Studies at SOAS, University of London. His work includes Made in Africa: Industrial Policy in
Ethiopia (OUP, 2015); African Economic Development: Evidence, Theory, and Policy (OUP, 2019); and China-Africa and an Economic Transformation (OUP, 2019). He was recognized as one of the 100 most influential Africans of 2016 and a 'leading thinker on Africa's strategic development' by the New African for his work
on industrial policies.