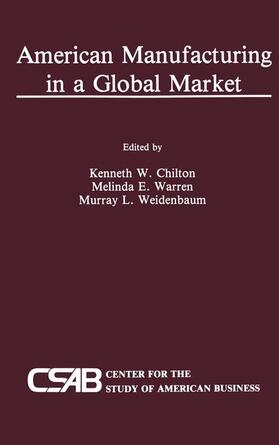 The health of American manufacturing has been a cause of real concern during the 1980s. Foreign competition, hostile takeovers, new technologies and a host of other factors have caused dramatic changes in this key sector of the American economy. Many ob­ servers of this process of change are singing the "rust belt blues," consigning U.S. manufacturing greatness to the history books. In April 1986, the Center for the Study of American Business at Washington University issued a study by its director, Dr. Murray L. Weidenbaum, which challenged this perception of American manu­ facturing's future. The report, entitled Learning to Compete, pointed to a variety of positive developments resulting from the ad­ versity faced by American firms in the first half of the decade: pro­ ducers had improved quality and productivity, reduced costs, and in­ creased emphasis on R&D. In November 1988, as a logical extension of this research, the Center held a conference on American Manufacturing in the 1990s. Focusing on American responses to the changing global competitive environment, this conference brought together the practical experi­ ence of business professionals and the more detached views of aca­ demic and media experts. In a day and a half of meetings, encompassing six separate ses­ sions, a luncheon address and an after-dinner debate, conference participants assembled an extensive profile on the state of U.S.

I: Effects of Public Policy on Manufacturing's Future.- 1. Government and Manufacturing: "Don't Just Stand There, Undo Something".- 2. Public Policy and Manufacturing: Back to Basics.- 3. What Do Economic Statistics Tell Us About Manufacturing's Future?.- 4. What Should Be Done for Manufacturing?.- 5. How to Rebuild America.- 6. Antitrust Policy and American Industrial Competitiveness.- II: Multinational Firms and Global Markets.- 7. To Compete Globally, American Firms Must Know Their Customers.- 8. The Changing Aerospace Marketplace.- 9. Joint Ventures: The Challenge of Cooperation.- 10. American Manufacturing in the 1990s: The Adjustment Challenge.- III: Education's Restructuring Task.- 11. Increasing Competition in U.S. Education.- 12. What Is the Role of Business in Education?.- 13. Targeting Education Reforms to Do the Most Good.- 14. A Higher Education Agenda for Manufacturing Management.- IV: Organizing for Success.- 15. Manufacturing Competitiveness Requires More Than Downsizing.- 16. The Effect of Mergers and Acquisitions.- 17. Manufacturing Growth through Acquisition.- 18. Creating Value from Castoffs.- V: The Changing Work Environment.- 19. Manufacturing Excellence and Work-Force Excellence Are Inseparable.- 20. Changes in Company Culture and Labor Relations.- 21. Building Business/Education Partnerships.- 22. Rhetoric and Reality in Labor Relations.- VI: R & D and Quality.- 23. Converting Knowledge into Products.- 24. Technology, Innovation and Commercialization.- 25. Research and the Pharmaceutical Environment.