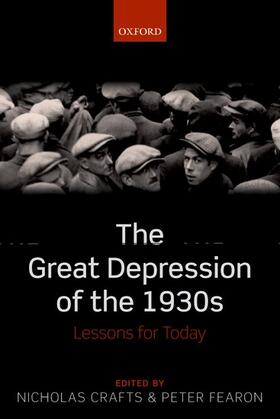 Crafts / Fearon The Great Depression of the 1930s: Lessons for Today

Crafts / Fearon The Great Depression of the 1930s: Lessons for Today

Understanding the Great Depression has never been more relevant than in today's economic crisis. This edited collection provides an authoritative introduction to the Great Depression as it affected the advanced countries in the 1930s. The contributions are by acknowledged experts in the field and cover in detail the experiences of Britain, Germany, and, the United States, while also seeing the depression as an international disaster. The crisis entailed the collapse
of the international monetary system, sovereign default, and banking crises in many countries in the context of the most severe downturn in western economic history. The responses included protectionism, regulation, fiscal and monetary stimulus, and the New Deal. The relevance to current problems
facing Europe and the United States is apparent.

The chapters are written at a level which will be comprehensible to advanced undergraduates in economics and history while also being a valuable source of reference for policy makers grappling with the current economic crisis. The book will be of interest to modern macroeconomists and students of interwar history alike and seeks to bring the results of modern research in economic history to a wide audience. The focus is not only on explaining how the Great Depression happened but also on
understanding what eventually led to the recovery from the crisis. A key feature is that every chapter has a full list of bibliographical references which can be a platform for further study.

Crafts, Nicholas
Nicholas Crafts is Professor of Economic History at the University of Warwick and Director of the ESRC Competitive Advantage in the Global Economy Research Centre (CAGE). He has held positions at the London School of Economics, UC Berkeley, Stanford, and Oxford. He is a Fellow of the British Academy and has been a consultant to many organizations including HM Treasury, IMF, and the World Bank.