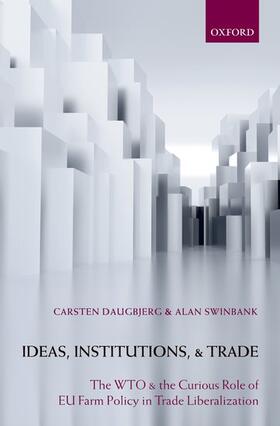 Daugbjerg / Swinbank Ideas, Institutions, and Trade: The Wto and the Curious Role of Eu Farm Policy in Trade Liberalization

Daugbjerg / Swinbank Ideas, Institutions, and Trade: The Wto and the Curious Role of Eu Farm Policy in Trade Liberalization

Agriculture has a small, and declining, importance in employment and income generation within the EU, but a political importance well beyond its economic impact. The EU's common agricultural policy (CAP) has often been the source of conflict between the EU and its trade partners within first the GATT, and then the WTO. In the Doha Round agriculture was again a sticking point, resulting in setbacks and delays. The position of the EU is pivotal. Due to the
comparatively limited competitiveness of the EU's agricultural sector, and the EU's institutionally constrained ability to undertake CAP reform, the CAP sets limits for agricultural trade liberalization blocking progress across the full compass of the WTO agenda. Therefore, the farm trade negotiation, with the
CAP at its core, is the key to understanding the dynamics of trade rounds in the WTO. The book, written by a political scientist and an agricultural economist, applies theory on ideas to explain how the agricultural sector came to be included in the Single Undertaking that resulted in the Uruguay Round agreements, and how this led to a dynamic interplay between CAP reform and the possibility of further agricultural trade liberalization within the WTO, thereby providing useful insights into
international trade relations.

Daugbjerg, Carsten
Carsten Daugbjerg is Professor of Trade and Food Policy in the Department of Political Science at the University of Aarhus, Denmark, where he has been since 1998. His research has focussed on agricultural policy (in particular reform of the Common Agricultural Policy: CAP), environmental policy, agricultural trade negotiations in the WTO, government-interest group relations and to a lesser extent EU food safety policy. He has had three books published and haspublished articles in international journals such as Comparative Political Studies, Journal of Common Market Studies, Journal of European Public Policy, Governance, Journal of Public Policy, Environmental Politics, Australian Journal of Political Science and Scandinavian Political Studies.Alan Swinbank recently retired as Professor of Agricultural Economics at the University of Reading, UK, where he had been since 1977. In the mid-1970s he spent four years as a junior administrator in the Directorate-General for Agriculture in the Commission of the European Communities. His research and teaching focussed on the food and farm policies of the EU, and on the WTO (World Trade Organization) process of agri-food trade liberalization. He has lectured and written extensively on thesetopics. In recent years he has published in the European Review of Agricultural Economics, the Canadian Journal of Agricultural Economics, Food Policy, the Journal of Common Market Studies, the Journal of World Trade, The World Economy, and others.