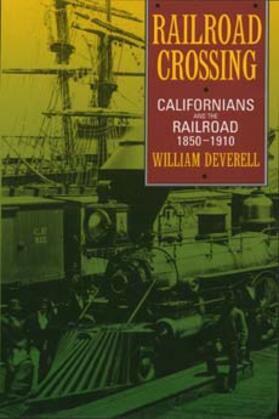 Nothing so changed nineteenth-century America as did the railroad. Growing up together, the iron horse and the young nation developed a fast friendship. Railroad Crossing is the story of what happened to that friendship, particularly in California, and it illuminates the chaos that was industrial America from the middle of the nineteenth century through the first decade of the twentieth.

Americans clamored for the progress and prosperity that railroads would surely bring, and no railroad was more crucial for California than the transcontinental line linking East to West. With Gold Rush prosperity fading, Californians looked to the railroad as the state's new savior. But social upheaval and economic disruption came down the tracks along with growth and opportunity.

Analyzing the changes wrought by the railroad, William Deverell reveals the contradictory roles that technology and industrial capitalism played in the lives of Americans. That contrast was especially apparent in California, where the gigantic corporate "Octopus"—the Southern Pacific Railroad—held near-monopoly status. The state's largest employer and biggest corporation, the S.P. was a key provider of jobs and transportation—and wielder of tremendous political and financial clout.

Deverell's lively study is peopled by a rich and disparate cast: railroad barons, newspaper editors, novelists, union activists, feminists, farmers, and the railroad workers themselves. Together, their lives reflect the many tensions—political, social, and economic—that accompanied the industrial transition of turn-of-the-century America.

1 "WHAT IS THIS RAILROAD TO DO FOR US?"
2 "CALIFORNIA NETTED WITH IRON TRACKS"
3 A VOLCANO AT ANY MOMENT: THE PULLMAN STRIKE IN CALU'ORNIA
4 THE LOS ANGELES "FREE HARBOR FIGHT"
5 PENS AS SWORDS: FICTION, NONFICTION, AND RAILROAD OPPOSITION
6 "LET US AGITATE AND AGITATE": PROGRESSIVES AND THE RAILROAD
EPILOGUE: BUILDING AN OCTOPUS