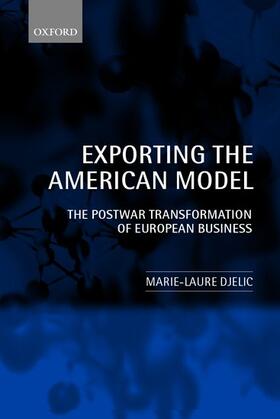 The Post-War Transformation of European Business

Marie-Laure Djelic explores the convergent and divergent trends in the evolution of business systems and organization in Western Europe in the post-war period. She examines in particular the influence of a large-scale, cross-national transfer of the American corporate model, including the Marshall Plan and the involvement of American business in European reconstruction. She focuses on France, West Germany, and Italy, looking in turn at the physical, ownership,
organizational, and governance structure of each after 1945. Her core argument is that the model had varying degrees of success in each of those three countries and, in some areas, encountered significant resistance.

The book underscores the socially constructed and historically contingent nature of structural arrangements shaping conditions of industrial production in capitalist countries today. National systems of industrial production are not given and necessary; they are made and shaped through time by actors with particular interests, often in direct confrontation with other groups. This shaping is taking place within particular institutional contexts, in peculiar political and geopolitical conditions.
Foreign actors, in geopolitical power positions, can, it is argued, play a particularly significant role in such processes.