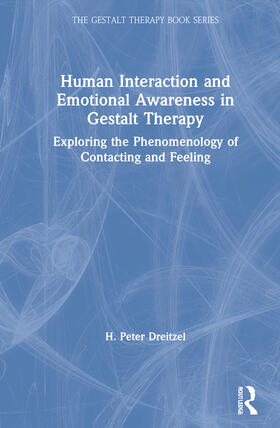 Exploring the Phenomenology of Contacting and Feeling

In Human Interaction and Emotional Awareness in Gestalt Therapy H. Peter Dreitzel explores a model of the contacting processes between human beings and their environments and presents a phenomenological exploration of the emotions guiding such contacts.
The book makes an important contribution to our understanding of the role of psychotherapy in the modern world, especially in the context of change and crisis. Dreitzel sets out a new perspective of how we interact with each other, how we frame our encounters and differentiate them from one another, how we give them meaning, and how they are related to our needs and wants. This is followed by a unique phenomenological exploration of the emotions guiding such contacts, the first time the world of human feelings has been explored in depth and systematically analysed in Gestalt thought. These innovative explorations are framed first by a discussion of the historical development of Western conventions regarding everyday behaviour, and secondly by an examination of perspectives on climate change. Dreitzel analyses the mental and emotional states of potential clients as they are affected by these global processes and the book also includes an epilogue which evaluates how to work with climate anxiety.
Dreitzel’s conception of social change, with Gestalt therapy at its core, is relevant to all aspects of humanistic psychology. It elevates empathy, emotional development and the prevention of suffering at all levels of society, filling important gaps in Gestalt therapy theory and expanding it into exciting new territory. Human Interaction and Emotional Awareness in Gestalt Therapy also contains an insightful foreword by Michael Vincent Miller, PhD, and will be essential reading for Gestalt therapists, other professionals with an interest in Gestalt approaches and readers interested in social interaction, climate change and the role of psychotherapy in a changing world.

II. Historical Context
The Fate of the Body and the Senses in the Civilizing Process

III. The satisfying Experience
The Contacting Process in the Interaction between Humans and their Environments
1. Figure and Ground
The process of gestalt formation in the contacting situation
2. The Phases of the Contacting Process
The unfolding of the self
3. The Instincts
Needing and desiring
4. Sensori-motor Functions
Perceiving and acting
5. Consciousness and Awareness
Accepting and rejecting
6. Aggression
Destroying and annihilating
7. Integration
Surrender and enjoyment
8. Post Contact
Enjoying the afterglow of an experience and affirming
9. Assimilation
Remembering and forgetting
10. Self-Identification and social Anchoring
Identifying oneself and taking responsibility

On physical Pain and the Nature of Suffering

On the anthropology of emotions
3. The fore-contact Emotions
Aversion and attraction
4. Aggression
The differences between aggression and assertiveness
6. Smiling, Laughing and Crying
Emotional gestures and emotional expressions
7. Beyond the Moment
Timeless emotions
8. Post-contact
Appreciative emotions
9. The inhibiting Emotions
Being anxious and feeling ashamed

V. The Impact of Emotions on Personality and Society
On the many Ways our Civilization depends on the refinement of our feelings

1. The Problem of Violence
The limits of emotional freedom
2. Un-integrated Affects and emotional Habits
Emotional attitudes and character
3. Forms of Sympathy
Contagious emotions and shared emotions
4. Forms of Empathy
To be emotionally sensitive to others and to identify with them
5. Catharsis and Therapy
On the relationship between involvement and distance in emotional experience
6. Aliveness and the Joy of Life:
General goals of Gestalt Therapy

1. Looking down from the Moon or End and Eternity of Nature
2. Anxiety and Civilization in everyday Life on Earth
3. Pressure of Time and the Fragility of Hope
4. The Uncertainty of the Future and the Certainty of Death
5. Flight into the trans-human Realm and the Misery of Power

Dreitzel, H. Peter
H. Peter Dreitzel, PhD, was born in Berlin in 1935. Between 1960 and 1970 he was Assistent Professor of Sociology, University of Göttingen, Germany, and Graduate Faculty of the New School for Social Research, New York, USA. From 1970 to 2000 he was Professor of Sociology at the Free University of Berlin, and in 1973 he co-founded the Berlin Gestalt Center (GZB). Inspired by his most significant teacher in the field, Isadore From, Dreitzel has been a Gestalt therapy practitioner since 1975 and has been a trainer and supervisor at several training institutes in Germany and other European countries. He is the author of several publicationson Gestalt therapy.