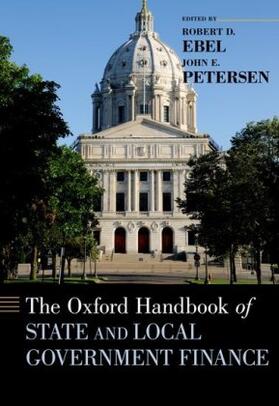 State and local government fiscal systems have increasingly become vulnerable to economic changes. Over the past three decades, state and local deficits during economic recession have been larger and deeper each time. The impact of the Great Recession and its aftermath of feeble growth and lingering high unemployment has been dramatic both in scope and intensity.

Before the crisis, long-term structural deficits were persistent for both individual governments and the entire sector as spending plans and patterns outpaced governments' revenue-generating capacity. The revenue systems of these governments eroded while the workloads and scope on the expenditure side of the state and local system budget continued to grow.

This handbook evaluates the persistent problems in the fiscal systems of state and local governments and what can be done to solve them. It contains 35 chapters authored by 60 practitioners and academics who are renowned scholars in state and local finance. Each chapter provides a description of the discipline area, examines major developments in policy, practices and research, and opines on future prospects.

The chapters are divided into four sections. Section I is a systematic discussion of
the institutional, economic, and political framework that provides a background for understanding the structure and financial performance of the state and local sector. The chapters in Section II provide an overview of the various components of state and local revenue systems and how they reacted to
the Great Recession. They analyze the diverse forms of taxes and charges in detail, prescribe remedies and alternatives, and examine the implications for future revenue performance.

Chapters in Section III turn to spending, borrowing and financial management in the state and local sector. The focus is on the big six service delivery sectors: education, health care, human services, transportation, pensions, and housing. Section IV is a set of chapters that look ahead and speculate about how the state and local government sector's money-raising, spending, and service delivery structures will adjust to the new circumstances.

I. The Economic, Demographic and Institutional Framework

5. State and Local Governments and the National Economy Rick Mattoon and Leslie McGranahan

26. Infrastructure Privatization in the United States in the New Millennium Ellen Dannin and Lee Cokorinos

32. Fiscal Austerity and the Future of Federalism Rudolph G. Penner

Ebel, Robert D.
Robert D. Ebel is Visiting Professor of Economics at the University of the District of Columbia and Chair of the Steering Committee of the Local Government and Public Sector Service Initiative. He is also a member of the IMF Panel of Experts/Fiscal Affairs Division. For the period 2006-2009 he served as Deputy Chief Financial Officer for Revenue analysis and Chief Economist for the Washington, DC government. Prior to joining the Office of the Chief Financial Officer,
he was a Senior Fellow at joint Urban Institute/Brookings Institution Tax Policy Center (TPC) and Lead Economist for the World Bank Institute's Capacity Building programs on Public Finance, Intergovernmental Relations, and Local Financial Management.

John Petersen is Professor of Public Policy and Finance at the George Mason School of Public Policy. Prior to joining the faculty, he was President and Division Director of the Government Finance Group.