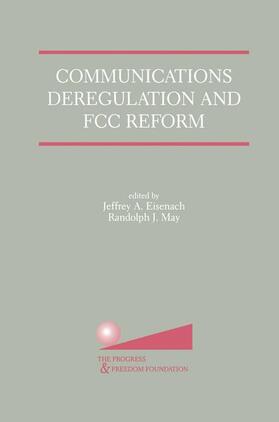 Eisenach / May Communications Deregulation and FCC Reform: Finishing the Job

Eisenach / May Communications Deregulation and FCC Reform: Finishing the Job

Communications markets have made much progress towards competition and deregulation in recent years. However, it is increasingly clear, in the age of the Internet and the digital revolution, that much more needs to be done, and that new approaches, both at the Federal Communications Commission and in Congress, will be required to complete the task. In this volume, the Progress and Freedom Foundation presents nine papers by communications policy experts and government policymakers that show how to finish the job of deregulating communications markets and reforming the FCC.
The Telecommunications Act of 1996 was a landmark piece of legislation for an industry moving from a monopoly orientation towards competition, but additional steps are needed to complete the process of implementing the pro-competitive, deregulatory vision of the act. Bringing together a group of the caliber represented in this book makes possible the best recommendations about the exact nature of those necessary changes. In this volume, the most difficult and politically-charged hot-button issues involving local and long distance competition, universal service, spectrum allocation, program content regulation, and the public interest doctrine are confronted head-on. As importantly, the authors recommend specific reform proposals to be considered by the Federal Communications Commission and Congress.
The ideas contained in the experts' essays were presented and debated at a conference hosted by The Progress & Freedom Foundation, which was held in Washington, DC, on December 8, 2000. The Progress & Freedom Foundation studies the impact of the digital revolution and its implications for public policy. It conducts research in fields such as electronic commerce, telecommunications and the impact of the Internet on government, society and economic growth. It also studies issues such as the need to reform government regulation, especially in technology-intensive fields such as medical innovation, energy and environmental regulation.

Eisenach, Jeffrey A.
May, Randolph J.