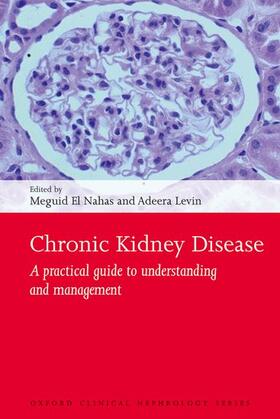 A practical guide to understanding and management

Chronic kidney disease (CKD) is rapidly becoming a global healthcare problem, with an estimated 10% of the general population affected. As a result, it is becoming increasingly important that primary care physicians and general physicians as well as aspiring nephrologists, have a firm understanding of CKD as well as access to the key information.

Practical and highly-accessible, this book provides a comprehensive guide to the understanding and management of patients with CKD. It offers both primary care physicians and non-nephrology specialists an introduction to and insights into the disease. The emphasis is on practical guidance and a focused approach to a number of key topics in the field including epidemiology, diagnosis and management, and the impact of CKD on chronic, non-communicable disease.

This is a unique contribution by internationally-renowned experts in the CKD field to update primary care physicians and non-specialists on major issues in this growing global healthcare problem.

El Nahas, Meguid
Professor El Nahas qualified as a doctor from Geneva Medical School, Switzerland, before training in London (Royal Postgraduate Medical School), Boston (Massachussetts General Hospital, Harvard Medical School) and Paris. He has been Consultant Nephrologist at the Sheffield Kidney Institute since 1986 and was appointed to the inaugural Chair of Nephrology at the University of Sheffield in 1996. He is a leading international expert in the field of Chronic Kidney
Disease (CKD) with major contribution to support the study of CKD in the emerging world. He has in excess of 150 publications on the subject. He sits on a number of national and international nephrology committees including some of the International Society of Nephrology. He was the founding member and
chair of International committee of the British Renal Association. He is currently on the editorial board of a number of nephrology journals and is the editor of Nephron Clinical Practice.

Dr Levin is a professor of medicine and consultant nephrologist at the University of British Columbia, and St Paul's Hospital, in Vancouver, Canada. She has had a long-standing interest in chronic kidney disease, and optimizing the outcomes of patients with early CKD and CVD. She is an educator and a clinical researcher, and is also involved in administrative aspects of program administration at the government level in British Columbia. She has mentored numerous young investigators, both
locally and internationally, and is a member of Canadian and international guideline groups as well as the editorial boards of major kidney journals. In addition, she has over 160 publications in peer reviewed journals.