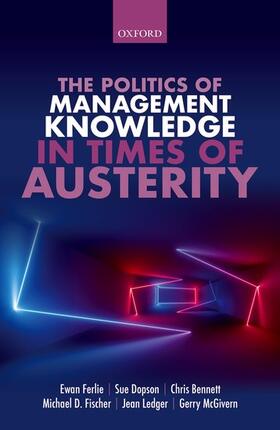 While the implementation of evidence-based medicine guidelines is well studied, there has been little investigation into the extent to which a parallel evidence-based management movement has been influential within health care organizations. This book explores the various management knowledges and associated texts apparent in English health care organizations, and considers how the local reception of these texts was influenced by the macro level political economy of
public services reform evident during the period of the politics of austerity.

The research outlined in this volume shows that very few evidence-based management texts are apparent within health care organizations, despite the influence of certain knowledge producers, such as national agencies, think tanks, management consultancies, and business schools in the industry. Bringing together the often disconnected academic literature on management knowledge and public policy, the volume addresses the ways in which preferred management knowledges and texts in these publicly
funded settings are sensitive to the macro level political economy of public services reform, offering an empirically grounded critique of the evidence-based management movement.

McGivern, Gerry
Professor Ewan Ferlie
Ewan Ferlie is Professor of Public Services Management at King's College London. He has published widely on themes of change and reorganization in public services settings, especially in health care and higher education. He is also interested in the tension between the logics of professionalism and managerialism in these settings. His work seeks to characterise high level narratives of public services 'reforming', including New Public Management and post NPM narratives of reform, which include
political, ideological, and technical components. He was elected as an Academician of the Social Sciences in 2008 and a Fellow of the British Academy in 2016.

Professor Sue Dopson
Sue Dopson is the Academic Director of the Oxford Diploma in Organisational Leadership, a Fellow of Green Templeton College, Oxford, and Visiting Professor at the University of Alberta, Canada. She is a noted specialist on the personal and organisational dimensions of leadership and transformational change. Her research centres on transformational change and knowledge exchange in the public and healthcare sectors, and she currently represents the University of Oxford as Non-Executive Director
of the Oxford Health NHS Foundation Trust.

Chris Bennett is an independent research psychologist. She was previously employed by the Medical Research Council, and as a Senior Research Fellow at the Centre for Corporate Strategy and Change, University of Warwick. Most of her research and publications have explored different aspects of change within the NHS and other public sector bodies.

Dr Michael Fischer
Michael Fischer is Professor in Organisational Behaviour and Leadership at Australian Catholic University, an Associate and Programme Director at Melbourne Business School, and Visiting Scholar at the Saïd Business School, University of Oxford. Trained as a business school social scientist and clinical group analyst, his research has a strong empirical focus on the practice-level microsociology of organisational change in research-intensive settings, especially in healthcare. He
specialises in ethnographic and comparative case studies, analysing intersubjective relations, emotions and power, and their potential to mobilise organisational change. He is an elected member of several international learned societies, including Fellow of the Royal Society of Medicine, Fellow of the Royal
Anthropological Institute, and Fellow of the Higher Education Academy.

Jean Ledger is a postgraduate researcher at King's College London.