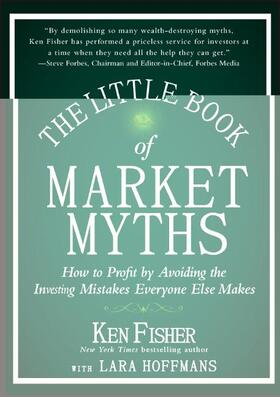 Everybody knows that a strong dollar equals a strong economy, bonds are safer than stocks, gold is a safe investment and that high PEs signal high risk.right? While such "common-sense" rules of thumb may work for a time as investment strategies, as New York Times and Wall Street Journal bestselling author, Ken Fisher, vividly demonstrates in this wise, informative, wholly entertaining new book, they'll always let you down in the long run. Ken exposes some of the most common--and deadly--myths investors swear by, and he demonstrates why the rules-of-thumb approach to investing may be robbing you of the kinds returns you hope for.
* Dubbed by Investment Advisor magazine one of the 30 most influential individuals of the last three decades, Fisher is Chairman, and CEO of a global money management firm with over $32 billion under management
* Fisher's Forbes column, "Portfolio Strategy," has been an extremely popular fixture in Forbes for more than a quarter century thanks to his many high-profile calls
* Brings together the best "bunks" by Wall Street's Master Debunker in a fun, easy-to-digest, bite-size format
* More than just a list of myths, Fisher meticulously explains of why each commonly held belief or strategy is dead wrong and how damaging it can be to your financial health
* Armed with this book, investors can immediately identify major errors they may be committing and adjust their strategies for greater investing success

Chapter One Bonds Are Safer Than Stocks 1

Chapter Four More Volatile Than Ever 37

Chapter Ten Wait Until You're Sure 93

Chapter Sixteen News You Can Use 171

Chapter Seventeen Too Good to Be True 181

Fisher, Kenneth L.
KEN FISHER is best known for his prestigious "Portfolio Strategy" column in Forbes magazine, where his over 28-year tenure of high-profile calls makes him the fourth longest-running columnist in Forbes's 90-plus-year history. He is the founder, Chairman and CEO of Fisher Investments, an independent global money management firm managing tens of billions for individuals and institutions globally. Fisher is ranked #271 on the 2012 Forbes 400 list of richest Americans and #764 on the 2012 Forbes Global Billionaire list. In 2010, Investment Advisor magazine named him among the 30 most influential individuals of the last three decades. Fisher has authored numerous professional and scholarly articles, including the award-winning "Cognitive Biases in Market Forecasting." He has also published nine previous books, including national bestsellers The Only Three Questions That Count, The Ten Roads to Riches, How to Smell a Rat, Debunkery and Markets Never Forget (But People Do), all published by Wiley. Fisher has been published, interviewed and/or written about in many major American, British and German finance or business periodicals. He has a weekly column in Focus Money, Germany's leading weekly finance and business magazine.

LARA HOFFMANS is Vice President of Content at Fisher Investments, managing editor of MarketMinder.com, a regular contributor to Forbes.com and coauthor of the bestsellers, The Only Three Questions That Count, The Ten Roads to Riches, How to Smell a Rat, Debunkery and Markets Never Forget (But People Do).