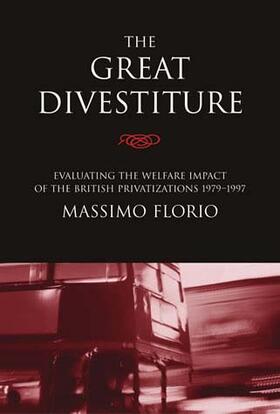 Evaluating the Welfare Impact of the British Privatizations, 1979-1997

The privatization carried out under the Thatcher and Major governments in Britain has been widely (although not universally) considered a success, and has greatly influenced the privatization of state industries in the transition economies of Eastern Europe. Massimo Florio's systematic analysis is the first comprehensive treatment of the overall welfare impact of this broad national policy of divestiture. Using the tools of social cost-benefit analysis, Florio assesses the effect of privatization on consumers, taxpayers, firms, shareholders, and workers. His conclusion may be surprising to some; his findings suggest that the changeover to private ownership per se had little effect on long-term trends in prices and productivity in Britain and contributed to regressive redistribution.After historical and theoretical overviews of privatization and a look at macroeconomic trends in the Thatcher-Major era, Florio considers in detail the microeconomic effects of British privatization on several key groups. In successive chapters, he examines firms and productivity changes; shareholders' windfall gains and evidence of underpricing and outperformance in privatized companies; workers, management, and changes in industrial relations; consumers and the quantity and quality of goods after the change to public ownership; and taxpayers and the interplay between privatization and tax reform. He follows these chapters with a case study of British Telecom—significant not only because it was the largest divestiture of the period but also because of its influence on subsequent telecommunications privatization elsewhere. The final chapter considers the overall quantitative impact of the Thatcher-Major privatization on all sectors and its relationship with regulation and liberalization. The Great Divestiture not only offers an exhaustive analysis of the effects of the British process of privatization but also illustrates a method of inquiry and a testable research approach that could prove to be useful in similar studies of other countries.

Florio, Massimo
Massimo Florio is Professor of Public Economics at the University of Milan. He is the author of The Great Divestiture and coeditor of The Economics of Infrastructure Provisioning (both published by the MIT Press).