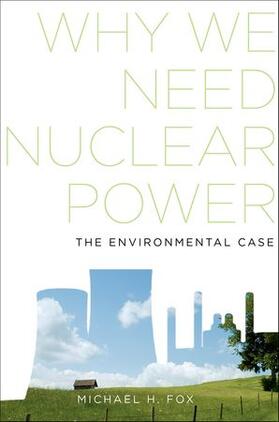 Fox Why We Need Nuclear Power: The Environmental Case

Fox Why We Need Nuclear Power: The Environmental Case

The issue of nuclear power has become a polarizing one, especially in light of the increasing need for sustainable energy sources, and events like the 2011 nuclear disaster in Japan. The public has been largely wary and even fearful of a reliance on nuclear power, pointing to the reactor meltdown in Chernobyl or the Three-Mile Island accident as evidence that nuclear power is an unfeasible and dangerous source of energy. However, with these fears come misconceptions
about the science behind nuclear power, and many arguments made against it lack the scientific grounding needed to contribute to the debate. At the same time, clean-energy sources like wind and solar have failed to prove that they can be used on a large enough scale to be relied upon.
In Why We Need Nuclear Power: The Environmental Case, experienced radiation biologist Michael H. Fox replaces the misconceptions about nuclear power with real science, and argues that it may be the best source of energy both for large-scale use and slowing the effects of global warming. Fox relies on thirty-five years of experience studying the biological effects of radiation to explore the issues surrounding nuclear power, addressing which of the public's concerns on the issue are
valid, and which are unsupported by science. He shows that nuclear power has crucial strategic importance in reducing the large amounts of carbon dioxide released into the atmosphere by burning fossil fuels. This is the first book to lay out clearly what we know about the biological effects of radiation, and
what science we use to know it. Why We Need Nuclear Power is a critical resource for anyone looking to understand the facts of the nuclear power issue, and what role nuclear power could play in reducing the environmental impact of the world's energy consumption.

Fox, Michael H.
Michael H. Fox is Emeritus Professor in the Department of Environmental and Radiological Health Sciences at Colorado State University. He has been a radiation biologist for 35 years.