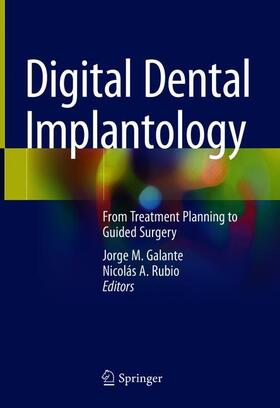 From Treatment Planning to Guided Surgery

This book describes the fusion of CBCT and CAD/CAM technologies for the purpose of surgical dental treatments and explains the advantages and applications of this digital approach for implant placement procedures and other oral surgical protocols.

All aspects of computer-aided imaging and design are first covered in the textbook, including the creation of DICOM and STL files; followed by the process of virtual merging to obtain a combined image. Secondly, clinical tips for the use of digital wax up, software interactions and accurate template fabrication are explained, including subtractive and additive methods used for this manufacturing step.

The remainder of the book is devoted to the application of technology fusion in implantology, guided bone regeneration, and maxillofacial surgery. Both static and dynamic guided surgeries are described. Materials characteristics and surgical instruments are also presented to define a correct selection criteria.

The digital approach outlined in this textbook involves a paradigm shift in the way traditional oral surgery is conceived. Technology fusion aims to improve treatment accuracy, optimize clinical time and reduce patient morbidity. Clinicians will find this book to be a valuable guide for virtual surgical planning and a path to introduce themselves into the exciting world of digital dental surgery.

Galante, Jorge M.
Jorge M. Galante is Director of Galante Dental Clinic in Mar del Plata (Argentina), which specializes in highly complex implants and treatments. Dr. Galante graduated from the Universidad Nacional de Rosario, Argentina, in 1975. He subsequently worked in the Department of Plastic and Maxillofacial Surgery at Hospital Interzonal General de Agudos "Dr. Oscar E. Alende"; the Orofacial Pain Center in University of Kentucky; and the Department of Temporomandibular Disorders in Eastman Dental Center (Rochester, New York). He is professor at Universidad de Buenos Aires and Universidad del Salvador, and has held positions at Universidad Maimónides and Universidad Nacional de Rosario. Dr. Galante has been invited speaker for conferences in Latin America, United States, and Europe and has published articles in leading journals in the fields of oral rehabilitation and dental implantology. He is an active member of the European Academy for Osseointegration, the International Congress of Oral Implantologists, and the International Team for Implantology.

Nicolás Agustín Rubio graduated from Universidad de Buenos Aires School of Dentistry (UBA-Argentina) in 2010 and went on to complete his specialization in Prosthodontics at the same University in 2014. His further training included an ITI Scholarship in Implant Dentistry at Universidad Autónoma Nacional de México (UNAM-Mexico) for the years 2015 and 2016. In 2017, he received accreditation as an Expert in Periodontal Clinic Treatments from Universidad Complutense de Madrid (UCM-Spain). Dr. Rubio is fellow of the International Team of Implantology and professor at Universidad de Buenos Aires, Universidad del Salvador and ROCA International. He has been working with Dr. Galante since 2012, devoting his training to complex oral rehabilitation and clinical research, and also has a private practice in Buenos Aires.