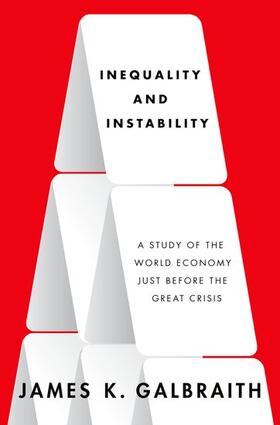 Galbraith Inequality and Instability: A Study of the World Economy Just Before the Great Crisis

Galbraith Inequality and Instability: A Study of the World Economy Just Before the Great Crisis

Inequality is a charged topic. Measures of income inequality rose in the USA in the 1990s to levels not seen since 1929 and gave rise to a suspicion, not for the first time, of a link between radical inequality and financial instability with a resulting crisis under capitalism. Professional macroeconomists have generally taken little interest in inequality because, within the parameters of traditional economic theory, the economy will stabilize itself at full
employment. In addition, enlightened economists could enact stabilizing measures to manage any imbalances. The dominant voices among academic economists were unable to interpret the causal forces at work during both the Great Depression and the recent global financial crisis.

In Inequality and Instability, James K. Galbraith argues that since there has been no serious work done on the macroeconomic effects of inequality, new sources of evidence are required. Galbraith offers for the first time a vast expansion of the capacity to calculate measures of inequality both at lower and higher levels of aggregation. Instead of measuring inequality as traditionally done, by country, Galbraith insists that to understand real differences that have real effects,
inequality must be examined through both smaller and larger administrative units, like sub-national levels within and between states and provinces, multinational continental economies, and the world. He points out that inequality could be captured by measures across administrative boundaries to capture data on more
specific groups to which people belong. For example, in China, economic inequality reflects the difference in average income levels between city and countryside, or between coastal regions and the interior, and a simple ratio averages would be an indicator of trends in inequality over the country as a whole. In a comprehensive presentation of this new method of using data, Inequality and Instability offers an unequaled look at the US economy and various global economies that was not
accessible to us before. This provides a more sophisticated and a more accurate picture of inequality around the world, and how inequality is one of the most basic sources of economic instability.

Galbraith, James K.
James K. Galbraith is the Lloyd M. Bentsen Jr. Chair in Government/Business Relations and Professor of Government at the LBJ School of Public Affairs at the University of Texas. He is the author most recently of The Predator State: How Conservatives Abandoned the Free Market and Why Liberals Should Too (Free Press, 2009, $25 cloth, $15 pbk, 18,127 combined RTD Bookscan)