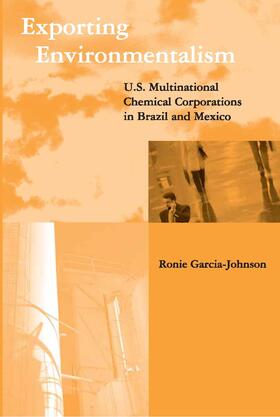 A great deal of research has focused on the role of governments, nongovernmental organizations, and advocacy groups in promoting environmental ideologies. Researchers and activists have generally assumed antienvironmental and antiregulatory stances on the part of corporations. Exporting Environmentalism is the first book to examine industry's transnational promotion of environmental ideas and practices. The book also challenges and complements other theoretical approaches to the study of international environmental politics. Rather than positing change in national and international environmental policy as the only valuable outcome, it looks at the environmental benefits of changes in perspectives, policies, and practices within the firms themselves. Ronie Garcia-Johnson shows that multinational corporations have incentives to raise the environmental, health, and safety standards of domestic companies in their host countries to maintain their competitive advantage. To determine industry's exportation and importation of environmentalism, Garcia-Johnson focuses on the flow of ideas, values, and strategies from United States-based chemical companies to companies in Mexico and Brazil. The comparative case study explains how and why Mexican and Brazilian companies are importing environmental ideas and changing their production policies. Garcia-Johnson then explores the effects of these private policies on communities, nongovernmental organizations, governments, and national environmental politics within Brazil and Mexico.