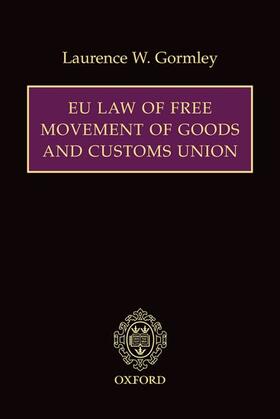 This work gives a practical overview of the legal aspects of the Free Movement of Goods and the working of the Customs Union within the European Union and their interpretation and application by the Court of Justice of the European Communities. The essential purpose of the free movement of goods and customs provisions of the EC Treaty is to contribute to the establishment of a common market that will ensure, amongst other things, free trade in goods between member
states. The free movement of goods is the primary pillar on which the internal market within the European Community - the heart of the EU - is based.

This book analyses the operation of the customs union, with detailed treatment of the Community Customs Code and its implementing and associated measures. It also discusses the elimination of customs duties and charges having equivalent effect, and the elimination of quantitative restrictions and measures having equivalent effect in trade between Member States. It concludes with coverage of state monopolies of a commercial character, and the nuclear common market.

It derives from a section in the looseleaf Law of the EU (Vaughan & Robertson, eds), and is made available here for the benefit of those who do not subscribe to the looseleaf.

1: Introduction
General
The Customs Code Committee
The Customs Territory of the Community
2: The Common Customs Tariff
Scheme and Background
Establishment of the Common Customs Tariff
Application of the Common Customs Tariff
Exclusions and Derogations
Interpretation
3: Origin and valuation of goods
The Origin of Goods
Proof of Origin
Importance of Origin
Customs Valuation Generally
Application of the Deductive and Computed Value
Reasonable Means: The residual or 'fall-back' method of valuation
4: Provisions applicable to goods brought into the territory of the Community until they are assigned a customs-approved treatment or use
Entry of Goods into the Customs Territory of the Community
Presentation to Customs
Summary Declaration and Unloading of Goods Presented to Customs
Obligation to Assign Goods Presented to Customs to a Customs-approved Treatment or Use
5: Customs-approved treatment or use
Assignment and Declarations to Customs
Release for Free Circulation
Community Transit
Customs Procedures with Economic Impact
Other Types of Customs-approved Treatment or Use
Export
6: Privileged Operations
7: Customs debt
8: Appeals
9: Elimination of customs duties and charges having equivalent effect in trade between member states
10: Elimination of quantitative restrictions and measures having equivalent effects in trade between Member States
Introduction
Imports
Exports
Justifications for Restrictions on Trade between Member States
Other Derogations from the Principle of the Free Movement of Goods
11: State Monopolies of a Commercial Character
12: The Nuclear Common Market

Gormley, Laurence W.
Laurence Gormley is Professor of European Law and Jean Monnet Professor at the University of Groningen in the Netherlands, and Professor at the College of Europe, Bruges. He was called to the Bar (Middle Temple) in 1978 and was awarded the Hon. Sir Peter Bristow Award for that year. He was an Official at the European Commission from 1983-1990, and in 1990 was appointed to the Chair of European Law in Groningen, where he leads the Jean Monnet Centre of Excellence. Heis on the Editorial Boards of numerous journals and has written extensively on European Union Law in myriad articles and contributions to books. He is the author of Prohibiting Restrictions on Trade within the EEC (North Holland, 1985) and of two parts of Vol. 52 of Halsbury's Laws (4th. Ed., 1986).He edited the 2nd. (1989) and 3rd. (1998) editions of Kapteyn & VerLoren van Themaat's Introduction to the Law of the European Communities (Kluwer Law International).He has been Visiting Professor at various Law Faculties, including University College, London, Bonn, Leuven and Bremen, and has been a Visiting Fellow at Sidney Sussex College and the Centre for European Legal Studies at Cambridge. From 1995-2005 he was Chairman of the Dutch Association for Procurement Law, of which he is now an Honorary member and member of the Advisory Council.