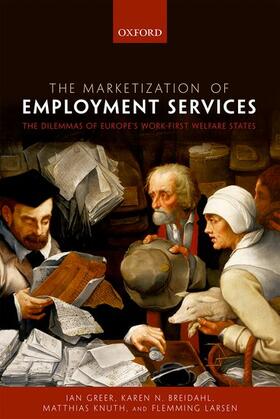 Across Europe, market mechanisms are spreading into areas where they did not exist before. In public administration, market governance is displacing other ways of coordinating public services. In social policy, the welfare state is retreating from its historic task of protecting citizens from the discipline of the market. In industrial relations, labor and management are negotiating with an eye to competitiveness, often against new non-union market players.

What is marketization, and what are its effects? This book uses employment services in Denmark, Germany, and Great Britain as a window to explore the rise of market mechanisms. Based on more than 100 interviews with funders, managers, front-line workers, and others, the authors discuss the internal workings of these markets and the organizations that provide the services.

This book gives readers new tools to analyse market competition and its effects. It provides a new conceptualization of the markets themselves, the dilemmas and tradeoffs that they generate, and the differing services and workplaces that result. It is aimed at students and researchers in the applied fields of social policy, public administration, and employment relations and has important implications for comparative political economy and welfare states.

Greer, Ian
Ian Greer has been Professor of Comparative Employment Relations at University of Greenwich since 2010 and Senior Research Fellow at Cornell University's School of Industrial and Labor Relations since 2015. Author of numerous articles on trade union strategy, public services, and marketization across Europe. He previously worked at Leeds University and in the US trade union movement.Karen N. Breidahl is a political scientist and Assistant Professor at Centre for Comparative Welfare Studies (ccws.dk), Aalborg University. She is the author of a number of articles and book chapters on welfare states, labour market policies and migration in the Scandinavian countries.Matthias Knuth studied sociology at the University of Hamburg, various positions in social research and research funding organizations, research on labour market and employment policy issues since 1990, doctoral degree 1996, habilitation 2004, appointed titular professor 2008, Chairman of the German Association for Social Scientific Labour Market Research since 2011, retired and remaining affiliated as research fellow 2016.Flemming Larsen is Professor and Head of Centre for Labour Market Research (CARMA) at Aalborg University. His research focuses on labor market and social policy, both from a political science and public administration perspective. One major research topic has been international comparative research applying the concepts of flexicurity and transitional labor markets. Another important field of research is analyses of labor market and social policy reforms, studying changes (and trends) inpolicies, as well as the motives and consequences of introducing new governance and operational reforms (e.g. marketization). FL has participated in several international research networks and projects and has published widely internationally. See http://personprofil.aau.dk/101257 for more information.