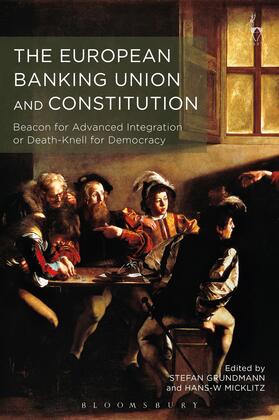 Grundmann / Micklitz The European Banking Union and Constitution: Beacon for Advanced Integration or Death-Knell for Democracy?

Grundmann / Micklitz The European Banking Union and Constitution: Beacon for Advanced Integration or Death-Knell for Democracy?

In 2012, at the height of the sovereign debt crisis, European decision makers pushed for developing an 'ever closer union' with the formation of a European Banking Union (BU). Although it provoked widespread debate, to date there has been no coherent discussion of the political and constitutional dimensions of the European Banking Union. This important new publication fills this gap. Drawing on the expertise of recognised experts in the field, it explores banking union from legal, economic and political perspectives. It takes a four-part approach. Firstly, it sets the scene by examining the constitutional foundations of banking union. Then in parts 2 and 3, it looks at the implications of banking union for European integration and for democracy. Finally it asks whether banking union might be more usefully regarded as a trade-off between integration and democracy. This is an important, timely and authoritative collection.

PART I
SOME CONSTITUTIONAL FOUNDATIONS OF EUROPEAN BANKING UNION
2. The Constitutional Dimension of Banking Union
Takis Tridimas
3. The Thin Red Line Between the OMT Decision and the Banking Union
Alessandro Busca