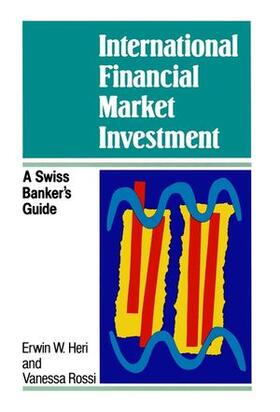 The Theory of Efficient Markets.

The Fundamentals of Modern Portfolio Theory.

The Process of Investment Policy Decision Making: Attempting a Synthesis.

Heri, Erwin W.
About the authors-- Erwin W. Heri joined Swiss Bank Corporation in 1987 as Vice President and Deputy Chief Economist. Before joining the bank he held a position as Assistant Professor of Economics and Statistics at the University of Basel and spent some 15 months as research scholar at the University of Michigan, Ann Arbor, and at Stanford University. In 1989 he became Head of SBC's Financial Analysis and Investment Advisory Division and since January 1991 he has been responsible for SBC's Global Investment Consulting, Portfolio Management and Investment Funds Management. In 1993 he also took over responsibility for SBC's International Private and Trust Banking Business. He is based in Basel where he still lectures in Statistics and Financial Theory at the University.
Vanessa Rossi has an MA in Economics from Warwick University in England, and was for three years a postgraduate student, research and teaching assistant at Princeton University, USA. She joined Swiss Bank Corporation in 1987 as Chief European Economist and Strategist and became a Director of Swiss Bank Equities Group responsible for equity research, before leaving the company at the end of 1992 to become a freelance writer and consultant.