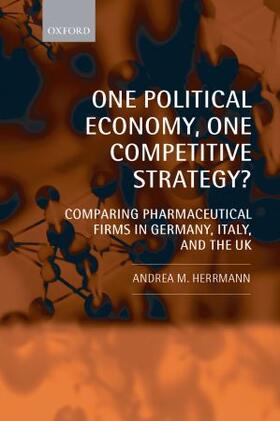 Herrmann One Political Economy, One Competitive Strategy?: Comparing Pharmaceutical Firms in Germany, Italy, and the UK

Herrmann One Political Economy, One Competitive Strategy?: Comparing Pharmaceutical Firms in Germany, Italy, and the UK

This book examines how firms adapt to the pressures of increasing international competition by testing the arguments on 'strategy specialization' proposed in the competitiveness literature in general, and by contributors to the 'varieties of capitalism' debate in particular. If different economies are characterized by distinct institutional arrangements, successful firms would be those that exploit the related comparative advantages and specialize in the competitive
strategies facilitated by national institutions.

One Political Economy, One Competitive Strategy? begins with an assessment of how many pharmaceutical firms in Germany, Italy, and the UK pursue strategies facilitated by national institutions governing the financial markets, antitrust activities, and the labour market. Quantitative analyses reveal that deviant firms, competing through institutionally unsupported strategies, outnumber conforming firms by far. Not only does this finding run counter to the expectations of the
competitiveness literature, it brings up a whole new line of inquiry. How can firms compete through strategies that are not supported by national institutions? The book addresses this question and illustrates that firms do not necessarily exploit comparative institutional advantages, but that they can also circumvent
institutional constraints. International markets and individual collaboration on a contractual basis allow firms to compete despite comparative institutional disadvantages. These findings suggest that trade liberalization does not lead to strategy specialization but to strategy diversification, depending on the inventiveness of entrepreneurs to develop individual approaches to compete.

Herrmann, Andrea M.
Andrea Monika Herrmann received her PhD in Political Economy from the Department of Political and Social Sciences at the European University Institute (Florence) in November 2006. She also holds an MSc in European Studies: EU Policy Making from the London School of Economics (2002), as well a German and a French BSc in European Business and Management Studies from the European School of Business (Reutlingen) and the École Supérieure de Commerce (Reims).
During her MSc and PhD studies, she was awarded various scholarships and research grants sponsored by the Deutscher Akademischer Austauschdienst, DAAD (2001-2005).

After completing her doctoral studies she became a postdoctoral research fellow at the Max Planck Institute for the Study of Societies, Cologne (2006-2008). Since 2008, she is an Assistant Professor in the Innovation Studies Group at the University of Utrecht.