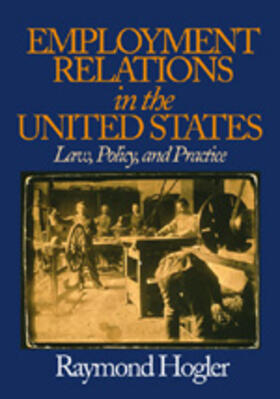 This book presents an overview of the economic, political, and social forces that shaped contemporary employment relations practices in United States. It provides students with the historical background they need to understand how the US system developed and how it differs from systems in other industrialized nations. Individual employment rights, including protecting individual employees from discrimination and workplace `rights', are thoroughly examined. In addition, current policy issues in employment (raising the minimum wage, growth of a contingent workforce, privatizing retirement) are discussed in detail.

Preface
1. Contemporary Employment Relations in Historical Perspective
The Start of a New Millenium
Analyzing "Exceptionalism": Is the United States Different and Why?
Studying Work
The Nature of Labor Contracts
An Overview of This Book
Firms and Managers
Organized Labor
Community Institutions
PART I. THE ERA OF MANAGEMENT, 1880 - 1935
2. Industrial Expansion and the Foundations of Unionisms
The Rise of Corporations
Beginnings of Collective Organization
Union Growth and Labor Conflict
From Conflict to Cooperation
3. Managerial Control and the Beginnings of State Regulation
Judges and the Law of Employment Contracts
Injunctions and Antitrust
Scientific Management and the Efficiency Movement
Welfare Capitalism and the Emergence of the Modern Personnel System
Workers' Compensation Insurance - An Early Exception to Exceptionalism
Summing up the 1920s
PART II: THE EVOLUTION OF COLLECTIVE BARGAINING
4. The Creation of Federal Labor Policy: World War I Through the New Deal
Wartime Policies and the Effect on Collective Bargaining
Labor Legislation Before the Wagner Act
The National Labor Relations (Wagner) Act of 1935
Social Legislation: Retirement, Unemployment, and Labor Standards
The Federal Mandates and the Collective Bargaining Process
5. Rise and Decline of the Labor Movement, 1935 - 2000
Founding of the CIO
The Supreme Court and the Wagner Act
Labor Relations During World War II
The Labor Management Relations (Taft-Hartley) Act, 1947
Cosolidation of Collective Bargaining and Employment Policies
Union Decline: 1970s to the Millenium
PART III: INDIVIDUAL EMPLOYMENT RIGHTS, 1960s - 2000s
6. Protecting Individuals From Discrimination
Equal Pay Act
Civil Rights Acts
Age Discrimination in Employment Act
Americans With Disabilities Act of 1990
7. Workplace Rights and Benefits
Workplace Health and Safety: OSHA
Employee Retirement and Income Security Act
Health Insurance and Employment
The Family and Medical Leave Act of 1993
Exceptions to the Employment At Will Rule
PART IV: REBUILDING THE EMPLOYMENT CONTRACT: PRACTICES, POLICIES, AND POLITICS
8. Contemporary Employment Issues
Organizational Justice as an Alternative to Litigation
Bringing Unions Back In
Economic Security for U. S. Workers: Health Insurance, Pensions, and Employment Stability
9. Conclusions
Back to the Future?
The Job Machine in the 2000s
A Final Thought
Index
About the Author

Hogler, Raymond L. (Louis)
Raymond L. Hogler teaches labor relations and human resource management at Colorado State University. He earned Ph.D. and J.D. degrees from the University of Colorado. He attended Emory University as a Woodrow Wilson Fellow and the University of Wales (Swansea) as a Fulbright Scholar. Prior to his employment at CSU, Dr. Hogler taught in the Department of Labor Studies and Industrial Relations at Pennsylvania State University, and in 1994, he was a Visiting Scholar at the University of Warwick. He is certified as a labor arbitrator by the Federal Mediation and Conciliation Service. Over the past two decades, he has published a number of books and articles on employment issues, including a study of employee participation programs and labor law in the United States. In 2007, he held the Fulbright Distinguished Chair in Labor Law at the Uiversity of Tuscia in Viterbo, Italy.