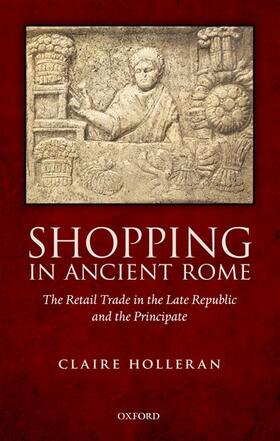 Holleran Shopping in Ancient Rome: The Retail Trade in the Late Republic and the Principate

Holleran Shopping in Ancient Rome: The Retail Trade in the Late Republic and the Principate

Shopping in Ancient Rome provides the first comprehensive account of the retail network of this ancient city, an area of commerce that has been largely neglected in previous studies. Given the remarkable concentration of consumers in ancient Rome, the vast majority of which were entirely reliant on the market for survival, a functioning retail trade was vital to the survival of Rome in the late Republic and the Principate.

In this volume Holleran provides the first systematic account of Rome's retail sector through a comprehensive analysis of the literary, legal, epigraphic, and archaeological evidence together with wide-ranging and innovative comparative studies of the distributive trades. Investigating the diverse means by which goods were sold to consumers in the city, and the critical relationship between retail and broader environmental factors, Holleran places Roman retail trade firmly within the wider
context of its urban economy. In considering the roles played by shops, workshops, markets, fairs, auctions, street sellers, and ambulant vendors in the distribution of goods to the inhabitants of the city, the volume sheds new light on the experience of living in the ancient city and explores the retail
trade of Rome in its totality.

Holleran, Claire
Claire Holleran currently holds a Leverhulme Early Career Fellowship at the University of Liverpool. She is the co-editor of Demography and the Graeco-Roman World: New Insights and Approaches (Cambridge, 2011) with April Pudsey, and A Companion to the City of Rome (Wiley-Blackwell, 2012) with Amanda Claridge, and is the author of several articles on the social and economic history of Rome.