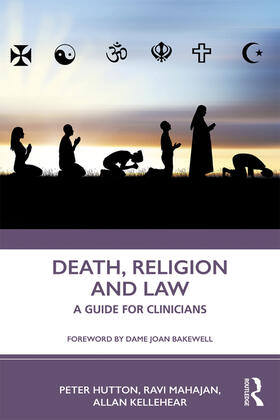 A Guide For Clinicians

This practical guide summarizes the principles of working with dying patients and their families as influenced by the commoner world religions and secular philosophies. It also outlines the main legal requirements to be followed by those who care for the dying following the death of the patient.

The first part of the book provides a reflective introduction to the general influences of world religions on matters to do with dying, death and grief. It considers the sometimes conflicting relationships between ethics, religion, culture and personal philosophies and how these differences impact on individual cases of dying, death and loss. The second part describes the general customs and beliefs of the major religions that are encountered in hospitals, hospices, care homes and home care settings. It also includes discussion of non-religious spirituality, humanism, agnosticism and atheism. The final part outlines key socio-legal aspects of death across the UK.

Death, Religion and Law provides key knowledge, discussion and reflection for dealing with the diversity of the everyday care of dying and death in different religious, secular and cultural contexts. It is an important reference for practitioners working with dying patients, their families and the bereaved.

Part 1: Belief systems in society and human history: interpretations of the mysteries of life and death

1. Introduction todeath and religion in society
2. Faith, why people believe and the need for tolerance
3. The characteristics of a religion or belief system
4. The range of belief paradigms
5. What happens when we die?
6. The soul: what is it; where is it; and does it exist?
7. What does death mean to patients and their relatives?
8. Near-death experiences, deathbed visions and visions of the bereaved
9. The entanglement of religion, ethics and societal development
10. The uses and abuses of religion

Part 3: Legal aspects of death in the UK

26. Life and death as biological and legal constructs
27. Medico-legal issues at the end of life
28. The responses of professionals and relatives around death
29. Medical certification of the cause of death (MCCD)
30. The registration of death
31. Coroners and autopsies
32. The body after death
33. Disposal of the body
34. Life support, brain death and transplantation
35. Performing last offices
36. Less common circumstances
37. Death in Northern Ireland and Scotland
38. Future changes in England and Wales

Kellehear, Allan
Peter Hutton was Professor of Anaesthesia at Birmingham University, an Honorary Consultant at University Hospital Birmingham and a Medical Examiner. He is now a non-Executive Director of the Royal Brompton and Harefield Hospitals.