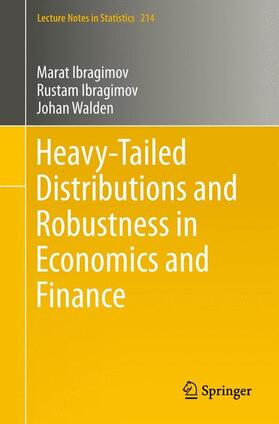 This book focuses on general frameworks for modeling heavy-tailed distributions in economics, finance, econometrics, statistics, risk management and insurance. A central theme is that of (non-)robustness, i.e., the fact that the presence of heavy tails can either reinforce or reverse the implications of a number of models in these fields, depending on the degree of heavy-tailed ness. These results motivate the development and applications of robust inference approaches under heavy tails, heterogeneity and dependence in observations. Several recently developed robust inference approaches are discussed and illustrated, together with applications.

Ibragimov, Marat
Since 2013, Marat Ibragimov works as an Associate Professor at Kazan (Volga Region) Federal University in Kazan, Russia. He graduated from the Department of Mathematics at Kazan State University in 1974 and received his Ph.D. from the Uzbek Academy of Sciences in 1982. His current research interests include econometric analysis of emerging, transition and post-Soviet markets, the study of income and wealth distribution and labour markets in emerging and transition countries, modelling of financial and economic crises, matrix theory and moment and probability inequalities, among others.Since 2012, Rustam Ibragimov works as a Professor of Finance and Econometrics at the Imperial College Business School. Professor Ibragimov received his Ph.D. in Economics from Yale University in 2005. He also holds a Ph.D. degree in Mathematics from the Uzbek Academy of Sciences. Following his graduation from Yale and prior to joining the Imperial, Rustam Ibragimov was an Assistant Professor (2005-2009) and then an Associate Professor (2009-2012) at Harvard's Economics Department. Professor Ibragimov's current research interests include modelling crises and contagion in financial and economic markets and the analysis of their effects on properties of key models in economics and finance; development of robust econometric and statistical inference methods and their applications in financial econometrics. Johan Walden is an Associate Professor of Finance at University of California at Berkeley, Haas School of Business. He received his Ph.D. in financial economics from Yale University. Professor Walden's research is focused on asset pricing with information networks, financial intermediaries, and on risk management with heavy-tailed risks. He also has a Ph.D. in applied mathematics from Uppsala University, Sweden.