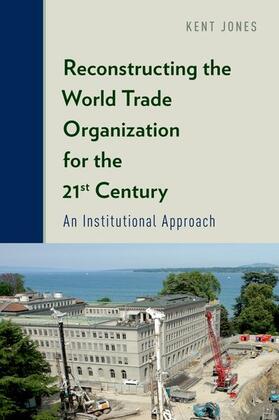 Jones Reconstructing the World Trade Organization for the 21st Century: An Institutional Approach

Jones Reconstructing the World Trade Organization for the 21st Century: An Institutional Approach

The institutional shortcomings of the World Trade Organization (WTO) became apparent during the Doha Round of Trade negotiations that began in 2001 and which aimed to improve the success of developing countries' trading by lowering trade barriers and adjusting other trade rules. This "development agenda " meant different things to rich and poor countries. In addition, many of the circumstances that supported success in General Agreement on Tariffs and Trade (GATT)
negotiations of 1947 were no longer present after the WTO was founded in 1995.

In Reconstructing the World Trade Organization for the 21st Century, Kent Jones examines the difficulties of the WTO in completing multilateral trade negotiations and possible ways to restore its ability to do so. The problem lies in the institutional structure it inherited from the GATT, which was designed for a more limited scope of trade negotiations among a relatively small number of wealthier, industrialized countries. Jones presents an institutional model of the GATT/WTO system,
which describes why such an organization exists and how it is supposed to accomplish its goals.

Institutional reforms will be necessary to restore the WTO's ability to complete global trade agreements, including a more flexible application of the consensus rule, a common understanding among all members about the limits of domestic policy space that is subject to negotiation, and clearer rules on reciprocity obligations. The popularity of bilateral and regional trade agreements, which have emerged as the alternative to WTO agreements, presents a threat to the WTO's relevance in trade
negotiations, but also an opportunity to "multilateralize " new and deeper trade integration in future WTO agreements. Aid for trade may also play an instrumental role in bringing more developing countries into WTO disciplines. Above all, WTO members must develop new ways to find common ground in order
to negotiate for mutual gains from trade.

Jones, Kent
Kent Jones is Professor of Economics at Babson College, where he has taught since 1982. He has also served as visiting professor at Brandeis University, Tufts University (Fletcher School), and the University of Innsbruck. He has held positions at the US International Trade Commission and the US Department of State. Dr. Jones is the author of several books and articles on international trade policy, including The Doha Blues: Institutional Crisis and Reform in the WTO
(Oxford University Press, 2010). His research focuses on globalization, trade policy and international institutions.