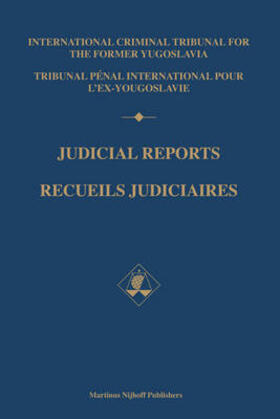 (Volumes I and II)

The Judicial Reports/Recueils judiciaires of the International Criminal Tribunal for the former Yugoslavia (ICTY) comprise (in English and French) all Judgments by both Trial Chambers and the Appeals Chamber as well as their most significant Decisions and Orders issued in a given year.
The publication is aimed at giving lawyers, scholars, students and the general public convenient access to the historic work of the ICTY, which was established pursuant to United Nations Security Council Resolution
827 in 1993 to try individuals accused of serious violations of international humanitarian law committed in the territory of the former Yugoslavia since 1991.
The Judicial Reports are organized chronologically by case. Within each case, one will find the selected materials, including separate and/or dissenting opinions that may accompany a given Trial Chamber or Appeals Chamber ruling.
The Judicial Reports will contribute to a greater knowledge of the judicial activities of the ICTY. Various annexes, such as various tables of cases and a table of references will facilitate the use of these volumes.

Int Criminal Tribunal for the Former Yu
Available through the United Nations, UN Sales No. E/F.05.III.P.1