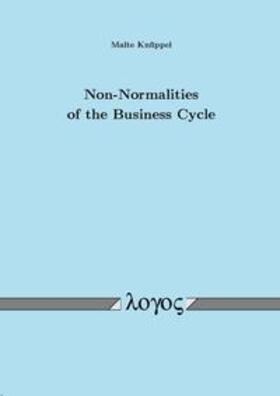 The question whether business cycles are asymmetric has been a field of macroeconomic research since the birth of the discipline itself. Also, considerable efforts have been dedicated to the construction of models where recessions are not simply the mirror image of expansions, but where the phases of the business cycle differ from each other with respect to the economic mechanisms at work during these phases.

The first part of this work aims at providing additional empirical evidence about the behavior of macroeconomic time series with respect to non-normalities. Our definition of non-normalities refers to the phenomena deepness, steepness, non-zero excess kurtosis, distributional non-normality, distributional asymmetry, conditional asymmetry of expected duration and asymmetric duration dependence. For the investigation we employ non-parametric and parametric tests where the latter are based on Markov-switching processes. For a certain class of Markov-switching processes, we provide a methodological contribution to the literature of tests for asymmetries by deriving the necessary formulas for the investigation of deepness and steepness. Conducting extensive Monte Carlo studies in order to assess the properties of different non-parametric tests, we find that these tests often suffer from low power in the presence of short samples and strong serial correlation. Using U.S. postwar data for GDP, domestic absorption, consumption, investment, capital, working hours, total factor productivity, labor productivity and the real wage, we find evidence for the presence of non-normalities of all variables except for consumption and capital. As expected, the statistical evidence for non-normalities found with parametric tests is in general stronger than the evidence obtained with non-parametric tests. The most pronounced non-normalities are observed for investment. In the second part, we investigate the ability of dynamic stochastic general equilibrium (DSGE) models to reproduce empirical deepness, steepness and excess kurtosis of the variables under study. We especially focus on deepness, since it is directly related to the often-cited phenomenon of pronounced, short-lived recessions and moderate long-lasting expansions. In a careful analysis, we find that standard DSGE models cannot replicate the empirical findings. Two modifications in order to remedy this problem are proposed, the first one considering non-normal shocks, the second one introducing an upper bound to capacity utilization. We find that non-normal shocks can account for the qualitative findings concerning empirical deepness, but that the quantitative results with respect to deepness do not match the data. Yet the model with bounded capacity utilization is capable of reproducing empirical deepness considerably well.