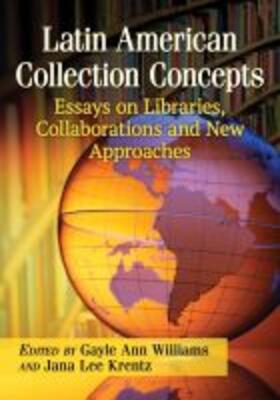 As academic libraries move forward toward an increasingly digital environment, this work illuminates the field of Latin American collection development, and serves as a guide for university and college administrators, library directors and heads of collection development as well as those who work to create foreign-language collections for research libraries. These essays by noted Latin American librarians and curators at research libraries in the US and Canada function as a general introduction to the field, but are also relevant for the more experienced area studies librarian.

The volume may come as a surprise to some readers who perceive the field as one dominated by static and traditional collection development strategies. While Latin America collection development is still molded and influenced by problematic and difficult obstacles in collecting, Latin American studies librarians have implemented ground-breaking approaches to meet these challenges and can serve as a model to other within the library information and scholarly fields.

Jana Lee Krentz is the curator for the Latin American, Iberian and Latinx collections at Yale University Library. Her research concentration is 19th and early 20th century Spanish, Brazilian and Portuguese novel, and neo-realism, as well as research education and area studies librarianship.