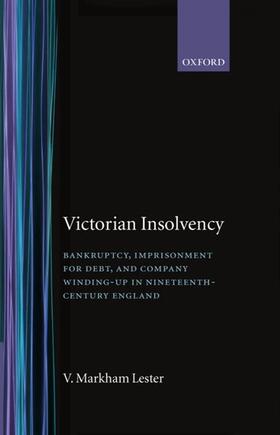 This is the first legal and financial history of bankruptcy in nineteenth-century England. V. Markham Lester offers a full statistical analysis and detailed account of bankruptcy, imprisonment for debt, and company winding-up, and traces the decline in the level of insolvency towards the end of the century. His scholarly and detailed analysis demonstrates the validity of the Victorians' notion that financial failure was a significant problem for English society.
Dr Lester shows that random factors may have played as great a role as cyclical fluctuations in bankruptcy levels.

Victorian Insolvency also adds a new and significant dimension to the debate on government growth by analysing for the first time the part the English legal system played in the growth of British government. By the end of the nineteenth century, the administration of bankrupt estates was one of the largest items of government expenditure. Dr Lester sets Victorian management of insolvency in the context of other nineteenth-century legal and financial reforms and assesses its role in the
development of the modern British state.