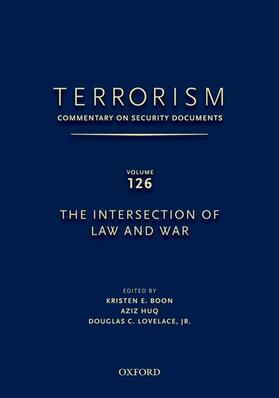 The Intersection of Law and War

Terrorism: Commentary on Security Documents is a series that provides primary source documents and expert commentary on various topics in the worldwide effort to combat terrorism. Among the documents collected are transcripts of Congressional testimony, reports by such federal government bodies as the Congressional Research Service (CRS) and the Government Accountability Office (GAO), United Nations Security Council resolutions, reports and investigations
by the United Nations Secretary-General and other dedicated UN bodies, and case law from the U.S. and around the globe covering issues related to terrorism. Most volumes carry a single theme, and inside each volume the documents appear within topic-based categories. The series also includes a subject index
and other indices that guide the user through this complex area of the law.

Volume 126, The Intersection of Law and War, takes a fresh look at the ways in which law and war intersect in this modern age of multifaceted and multidimensional warfare. Professor Douglas Lovelace, Jr. has organized Congressional Research Service reports and United Nations studies to discuss how U.S. law and international law bear on contemporary national security issues such as: terrorism in the context of the war powers debate; the use of drones for targeted killings; maintaining
and closing the U.S. detention facility at Guantanamo Bay; and illegal border crossing into the United States.

Lovelace, Douglas
Douglas C. Lovelace, Jr. is the Director of the Strategic Studies Institute at the US Army War College. Earlier in his military career, he worked on national security directives. He holds an MBA degree from Embry Riddle Aeronautical University and a JD from Widener School of Law.