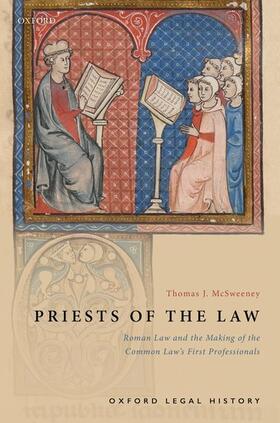 McSweeney Priests of the Law

Roman Law and the Making of the Common Law's First Professionals

McSweeney Priests of the Law

Priests of the Law tells the story of the first people in the history of the common law to think of themselves as legal professionals. In the middle decades of the thirteenth century, a group of justices working in the English royal courts spent a great deal of time thinking and writing about what it meant to be a person who worked in the law courts. This book examines the justices who wrote the treatise known as Bracton. Written and re-written
between the 1220s and the 1260s, Bracton is considered one of the great treatises of the early common law and is still occasionally cited by judges and lawyers when they want to make the case that a particular rule goes back to the beginning of the common law. This book looks to Bracton less for what it can tell us about
the law of the thirteenth century, however, than for what it can tell us about the judges who wrote it.

The judges who wrote Bracton - Martin of Pattishall, William of Raleigh, and Henry of Bratton - were some of the first people to work full-time in England's royal courts, at a time when there was no recourse to an obvious model for the legal professional. They found one in an unexpected place: they sought to clothe themselves in the authority and prestige of the scholarly Roman-law tradition that was sweeping across Europe in the thirteenth century, modelling themselves on the jurists
of Roman law who were teaching in European universities. In Bracton and other texts they produced, the justices of the royal courts worked hard to ensure that the nascent common-law tradition grew from Roman Law. Through their writing, this small group of people, working in the courts of an island realm,
imagined themselves to be part of a broader European legal culture. They made the case that they were not merely servants of the king: they were priests of the law.

McSweeney, Thomas J.
Thomas J. McSweeney is Professor of Law at William & Mary Law School. He earned his J.D. and Ph.D. in history at Cornell University.