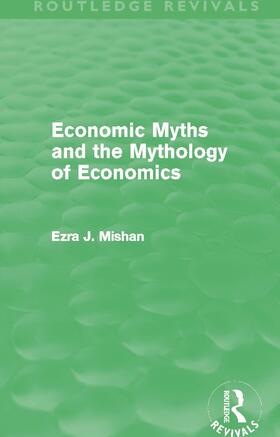 Mishan Economic Myths and the Mythology of Economics

Mishan Economic Myths and the Mythology of Economics

First published in 1986, Economic Myths and the Mythology of Economics is a polemical study in which the author focuses on the popular myths and misconceptions that colour our understanding of economic issues. Professor Mishan, the internationally recognised economist and expert in the field of resource allocation and cost benefit analysis, undermines the idea that economics is a science. But such are popular myths, he argues, that governments employ battalions of economists in their ongoing attempts to promote economic growth, efficiency and employment. The author challenges the validity and measurement of such concepts as economic efficiency and GNP, and questions the assumption that free competitive markets can operate effectively in a rapidly changing, high-technology society. Professor Mishan foresees in his study further expansion as an unavoidable consequence of continued innovation, while revealing the interconnecting processes by which innovative activity, designed to raise living standards, has begun to erode the moral and psychological foundations of a viable and libertarian society.

Part 1: 1. Demand-Pull and Wage-Push 2. The New Inflation Part 2: 3. The Limits to Freedom of Choice? 4. The Mystique of Economic Expertise 5. GNP: Measurement or Mirage? Part 3: 6. The Road to Repression 7. The Future Is Worse Than It Was 8. Religion, Capitalism and Technology