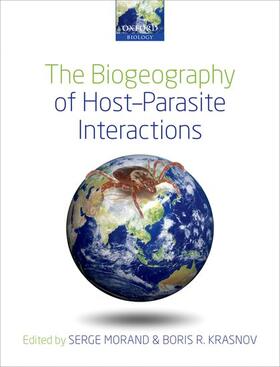 Biogeography has renewed its concepts and methods following important recent advances in phylogenetics, macroecology, and geographic information systems. In parallel, the evolutionary ecology of host-parasite interactions has attracted the interests of numerous studies dealing with life-history traits evolution, community ecology, and evolutionary epidemiology.

The Biogeography of Host-Parasite Interactions is the first book to integrate these two fields, using examples from a variety of host-parasite associations in various regions, and across both ecological and evolutionary timescales. Besides a strong theoretical component, there is a bias towards applications, specifically in the fields of historical biogeography, palaeontology, phylogeography, landscape epidemiology, invasion biology, conservation biology, human evolution, and health
ecology. A particular emphasis concerns emerging and re-emerging infectious diseases linked to global changes.

Morand, Serge
Serge Morand is an evolutionary ecologist who did his PhD at the University of Rennes (Brittany, France) and now works as a CNRS scientist in the "Institut des Sciences de l'Evolution" at the University of Montpellier 2 and at the CIRAD in the unit "Animal et Gestion Intégrée du Risque". Serge Morand was author or co-author of more the 250 publications and 5 edited books.

Boris Krasnov was born in Moscow (former USSR) and graduated from Moscow State University in 1978. I received my PhD from Moscow State University in 1986 and worked in the Institute of Evolutionary Morphology and Ecology of Animals of the Academy of Science of the USSR. From 1991, I am working in Ben-Gurion University of the Negev, Israel. At present, Boris Krasnov is a Full Professor. and authored about 200 publications, including 6 books (three monographs and 3 edited volumes). Rewards:
2003. Poula and David Ben-Gurion Foundation. Yudith and Abraham Pasternak Prize; 2006. BGU Rector's Award for Outstanding Scientists.